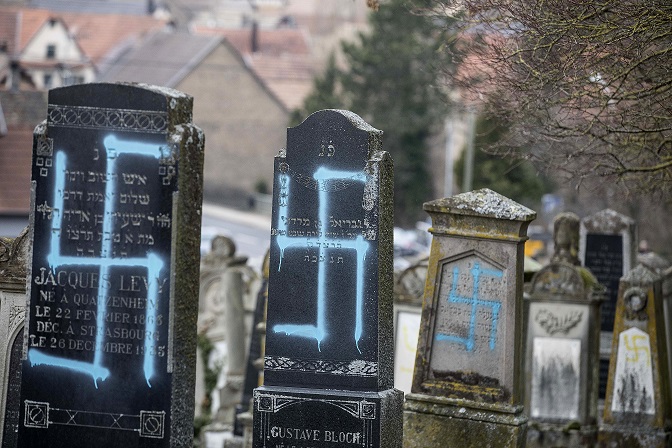 Anti-Jewish vandalism has struck France, Greece and Ukraine within the past week.

About a dozen graves were vandalized in the Jewish cemetery of Bayonne, in the Pyrénées-Atlantiques area, in southwest France.

The damage was sighted by Déborah Loupien-Suares, president of the Jewish community in Biarritz and Bayonne, while visiting her grandparents’ graves. She told local media that while several gravestones were smashed and broken, there was no anti-Semitic graffiti at the scene.

Loupien-Suares told the French daily Le Parisien that she would file a complaint with local police on Tuesday.

At Kharkiv’s V.N. Karazin Kharkiv National University in Ukraine, the dorm of a Jewish student, identified only as “Vladislav,” was vandalized with anti-Semitic etchings, including “Ave Satan,” swastikas and far-right symbols on a wall. Vladislav’s bible was stolen by the perpetrators, reported the website jewishnews.com.ua.

Finally, in the northern Greek city of Trikala – once one of the country’s oldest Jewish communities – a monument to Holocaust victims was vandalized, and the exterior of the city’s synagogue was defaced with slogans, including “Jewish snakes out.”

The Star of David was stolen from the monument, whose surrounding fencing was torn down.

The monument was vandalized twice in 2019.