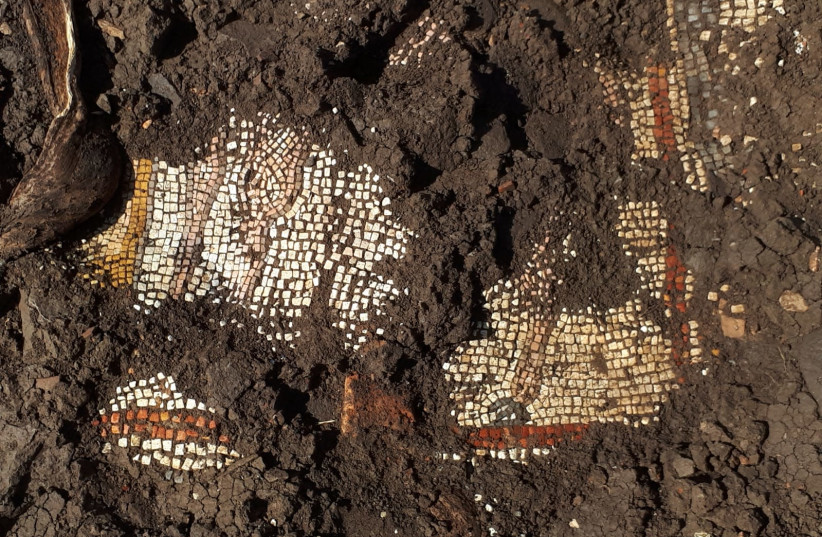 Colorful mosaic fragments have been uncovered in a site of a rare Roman period synagogue in the Golan Heights, the University of Haifa said in a statement on Monday.

The mosaics unearthed during excavations in the site of Majdulia depict the legs of several animals and birds, although the poor state of preservation does not allow researchers to identify the species.

Mechael Osband from the university’s Zinman Institute of Archaeology explained that the findings date back to the third century CE and that very little information from that period is available – not only about the Jewish presence in the Golan, but about synagogues in the land of Israel as a whole.

“In the third century CE, regarding synagogues’ structure, we see an interesting combination between the Second Temple tradition – for example, in the shape of the seating arrangement and in the unadorned style, and new elements that over time became commonly found in prayer halls, such as colorful mosaic featuring animals,” he added.

According to the university’s statement, until recently, the general understanding among scholars was that the Jewish presence in the Golan ceased to exist with the destruction of Gamla by the Romans in 67 CE. For this reason, the remains of the synagogue in Majdulia, as well as other findings from the last few years, have been considered of extreme importance.

The synagogue featured a rectangular plant of 13 m. by 23 m. The archaeologists found out that its lateral halls’ floors were decorated with geometric designs, while the richer mosaics featuring animals were laid down to ornate the main room.

According to Osband, between the second and the third century, synagogues underwent a transformation from a place specifically devoted to learning to sites for communal prayer.

“We know that synagogues at the end of the Second Temple period served mainly as a place of Torah study,” the scholar explained. “At the end of the Roman period, and especially in the Byzantine period, the synagogue started served as a prayer hall, a kind of ‘little temple.’ They therefore became much more luxurious and it is not uncommon that they also included fancy mosaics.”

Shalom Ariel, a graduate student from Kinneret College also contributed to the excavation, which has been carried out with the help of the Golan Regional Council and the Shamir Research Institute, and with the support of the Israel Science Foundation.