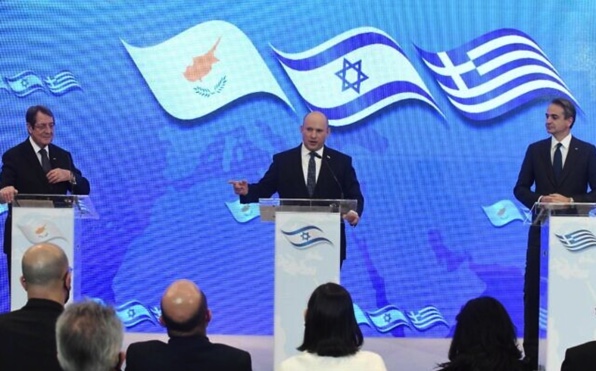 Hours after Syrian mediaaccused Israel of striking the port city of Latakia, Prime Minister Naftali Bennett said on Tuesday that the military was constantly fighting “bad forces” in the Middle East.

“We’re pushing back on the bad forces of this region day and night,” he said in English alongside Greek Prime Minister Kyriakos Mitsotakis and Cypriot President Nicos Anastasiades. “We won’t stop for one second. This happens almost daily.”

“In the face of destructive forces we will continue to act, we will be persistent, and we will not tire,” Bennett pledged.

Turning to the trilateral relationship, Bennett said that the regional EastMed Gas Forum — which includes Israel, Egypt, Greece, Cyprus and the Palestinian Authority — was progressing.

“We are expanding our ties in the fields of security, the economy, technology, tourism, and emergency services,” he said, referencing mutual aid provided over the summer in the face of forest fires in all three countries.

“This trilateral alliance between Israel, Cyprus, and Greece is good for our people, good for our countries, and good for the region,” Bennett declared.