After 50 hours of fire exchanges, Israel waits to see if Gaza Strip stabilizes 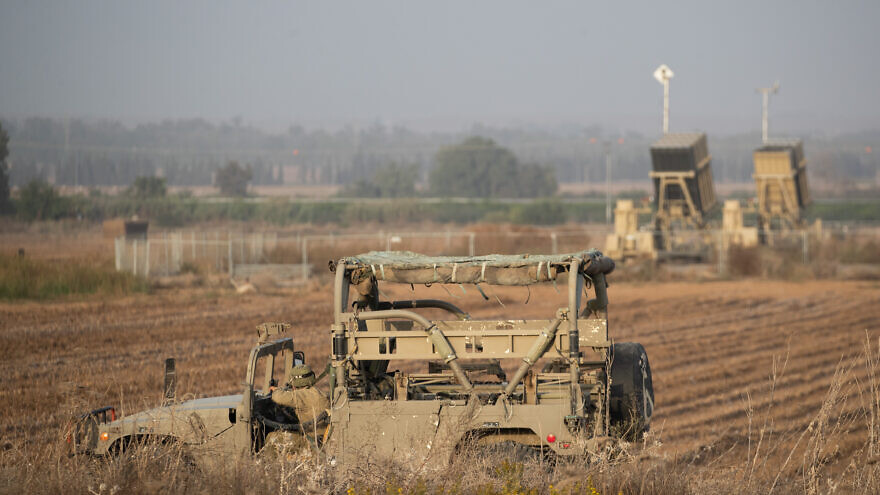 (November 14, 2019 / JNS) A ceasefire that appeared fragile, and which was punctured twice by rocket fire from Gaza, went into effect on Thursday after 50 hours of combat between the Iranian-backed Palestinian Islamic Jihad terror faction and the Israel Defense Forces.

As many as 450 rockets were fired at Israeli cities and towns throughout the escalation, though more than 90 percent of those that were heading into built-up areas were shot out of the sky by Iron Dome air-defense batteries. Some 60 percent of the rockets landed in open areas in Israel.

According to initial Israeli military assessments, the round of fighting dealt a significant blow to PIJ, the second-largest armed organization in the Gaza Strip. Defense chiefs are now waiting to see whether the hold in hostilities will allow Israel to keep most of its focus on the far larger threats to the north.

The combat with PIJ, which began with the precision-missile strike assassination on Baha Abu al-Ata—the faction’s de facto military commander in Gaza—in the early hours on Tuesday morning was largely contained by Israel. The IDF’s intention to keep Hamas out of the fighting and isolated from the PIJ’s attacks proved a success.

“Operation Black Belt” is the codename the IDF gave to the strike on Abu al-Ata and to the events that followed—events that the defense establishment had been preparing in advance for a number of months.

When it became clear to Israel that Abu al-Ata was going to disregard all warnings to cease from his unprovoked rocket attacks on Israeli civilians—that he was intent on going ahead with bombings, sniper shootings and rocket attacks on southern Israel in the near future—the Israeli cabinet accepted the recommendation of defense officials and decided to take him out.

‘Keep Hamas out of the fighting’

Lt. Gen. Jonathan Conricus, IDF Spokesperson to the international media, told journalists by conference call on Thursday that 10 days ago, Israel took the final decision to eliminate the PIJ commander “in order to stabilize the area and remove an obstacle to the various diplomatic arrangements.”

He was referring to the in-depth mediation efforts led by Egypt aimed at brokering a long-term truce and economic improvements in Gaza.

Hamas’s decision to preserve those talks and avoid war with Israel became prominent throughout the escalation, as it paid little more than lip service to the PIJ’s fight. In practice, Hamas left PIJ to battle Israel alone, after PIJ spent months undermining Hamas’s authority and sabotaging Egyptian diplomatic efforts to reach long-term calm.

Hamas retains its jihadist fundamentalist ideology, but its role as a regime in Gaza has forced it to be more pragmatic in its moves—a restriction that has not applied to PIJ.

“The aim of ‘Black Belt’ was to improve the security situation by delivering a significant blow to PIJ and thus creating deterrence afterwards. We of course wanted to keep Hamas out of the fighting. We wanted to stabilize the situation in and around Gaza,” stated Conricus.

The IDF kept its firepower selective, targeting only PIJ military assets only—for the first time. The Shin Bet intelligence agency worked tightly with the Israel Air Force and with officers in a joint command room set up in the IDF Gaza division for the purpose of coordinating rapid strikes on time-sensitive targets.

The command room combined the operations of the air force, the Shin Bet and other branches of the military to detect and strike targets as quickly as possible. This enabled Israel to hit launch crews at a fast rate.

An estimated 25 PIJ military operatives were killed by Israeli airstrikes, either in action as they tried to fire at Israel (around 10 such cases), or in different stages of preparations. PIJ also sustained Israeli strikes on infrastructure targets linked to its weapons-production industry. The Israeli Navy struck PIJ targets on the Gazan coastline.

Anticipating the risk of terror-cell intrusions from Gaza over land, the IDF beefed up troops around the Strip, though no cross-border raids were attempted.

“We used only a limited part of our capabilities,” said Conricus.

The IDF’s efforts to avoid harming non-combatants meant that most of the casualties were active PIJ operatives, he added. The organization’s commanders use their private homes as weapons’ storage facilities, and family members as human shields to protect those weapons.

“We did strike private homes of the commanders of the PIJ, which from a legal point of view are military targets because they are used for military activity, storing weapons, and for command and control,” he added. “Our operations were very accurate, very deliberate and based on highest level of intelligence that we had. One of the key considerations was to limit to the greatest extent possible collateral damage.”

As Israel watches now to see whether the removal of Abu al-Ata stabilizes the Gaza Strip, it remains on a high state of alert to the much larger threats stemming from the north and east. First and foremost among those is Hezbollah, with an arsenal of 130,000 rockets and missiles in Lebanon. In neighboring Syria, the Iranians and their Shi’ite militias are trying to entrench themselves and build missile bases to threaten Israeli cities and civilians.

“We are ready for various scenarios, and we understand that Iranian forces and proxies, as we speak, are trying and preparing various attacks against Israel from various geographical regions, which are not limited to Lebanon and Syria,” warned Conricus. “We understand that this is the situation, and we are operating and preparing accordingly. We are continuing to focus on the north, continuing to stabilize the south, and we will respond to any threat against Israeli civilians, wherever it comes from.”