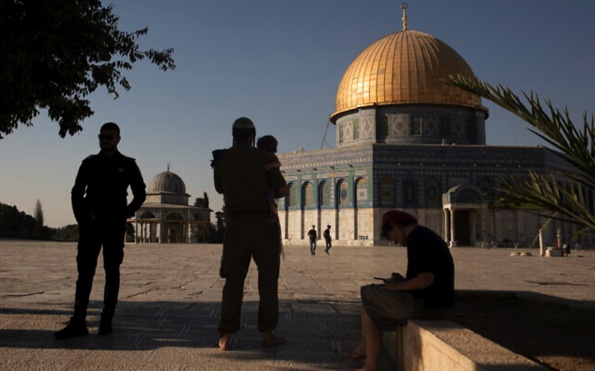 Palestinian Authority President Mahmoud Abbas reportedly warned Defense Minister Benny Gantz that while he was committed to stopping violence in the West Bank, he was concerned that changes to the religious status quo on the Temple Mount in Jerusalem could lead to an “unstoppable” escalation, Hebrew media reported Wednesday.

Abbas was hosted by Gantz on Tuesday at his home, the first time the Palestinian leader has held talks with a senior Israeli official in Israel since 2010. The meeting was Gantz and Abbas’s second since the new Israeli government was formed in June, with the first taking place in Ramallah. According to the Defense Ministry, it lasted two and a half hours; part of it was between Abbas and Gantz alone.

Reporting details from the conversation on Wednesday, both Channel 12 and 13 quoted Abbas as telling Gantz that he would not support a return to violence in the West Bank “even if a gun was held to my head.”

However, Abbas told Gantz he was concerned about violence erupting in Jerusalem, particularly surrounding the Temple Mount. Abbas told Gantz that if there was a change to religious elements on the holy site it would lead to an “unstoppable” escalation, Channel 13 reported.