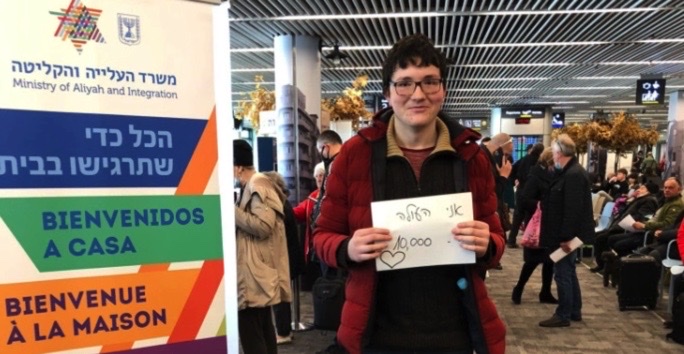 ‘A Privilege to Help in Their Hour of Need’: Israel Welcomes 10,000th Immigrant Since Russian Invasion of Ukraine

Sasha Zlobjn from the Ukrainian city of Kharkiv became the 10,000th refugee to immigrate to Israel since the start of the Russian invasion last month, Israel’s Immigration and Absorption Ministry announced on Monday.

“I fled from Kharkiv with my grandmother and grandfather, but unfortunately my parents were left behind,” Zlobjn recounted upon arriving at Israel’s Ben Gurion Airport. “It was an exhausting journey that ended with this nice reception.”

Zlobjn landed on Monday with his grandparents on a flight from the Moldovan capital Chisinau, along with 90 other immigrants.

Immigration and Absorption Minister Pnina Tamano-Shata said that “despite the difficult circumstances that brought us the widespread immigration from Ukraine, the State of Israel considers this a time of goodwill and there is a great national and government mobilization for the absorption of immigrants.”

Tamano-Shata said that the absorption of over 10,000 new immigrants — counting war refugees from Ukraine as well as those fleeing repression in Russia and Belarus — in just a month required a “concentrated national effort and round-the-clock work” by the ministry’s employees.

“This is the pace we are expecting in the coming months,” Tamano-Shata said. “It is a privilege for all of us.”

Of the new immigrants who have arrived over the past month, about 3,369 chose to stay in hotel rooms rented for them by the Immigration and Absorption Ministry.