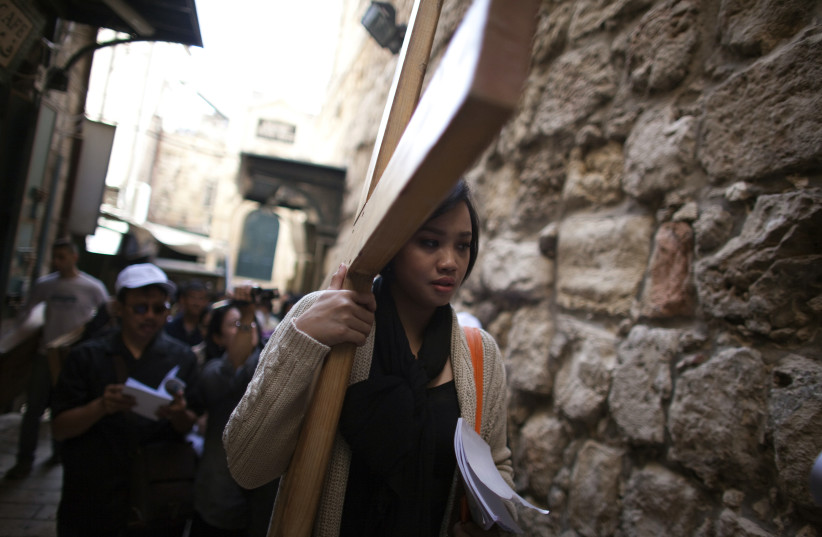 ‘Let them go to the Land and to Jerusalem, build the Temple, raise up the priesthood, principality and Moses with his Law so that they again become Jews and possess the Land. If that happened, they should soon see us on their heels and also become Jews.” – Martin Luther (from Heiko Oberman’s Wurzeln des Antisemitismus. Christenangst und Judenplage im Zeitalter von Humanismus und Reformation)

Setting aside the sarcastic nature of this quote from Luther, it raises a question that is increasingly relevant to the complicated endeavor known as Jewish-Christian relations. Namely, what would Luther’s theology of the Jews have been had the current State of Israel existed in his time, prosperous and populated by millions of Jews ingathered from the four corners of the earth? I’m not suggesting that Luther would have made good on his promise to convert to Judaism. But would he have made this statement in this way? Certainly not.

Luther, and Augustine before him, looked at the state of the Jewish people – scattered, powerless, and in a seemingly eternal exile – and drew their theological conclusions based on what they saw and understood from the Bible. They, and many other Christian theologians before and after them taught that the church had replaced Israel as the future recipient of the covenantal promises of the Bible

A few months ago, I was invited by a Presbyterian pastor from the United States to speak to her church after she had met me on a visit to Israel. As a member in good standing of the Presbyterian Church of the United States of America (PCUSA), she requested permission from the General Presbyter of her state to host the event. The response of the GP was lukewarm. Unsurprisingly, he was not happy with her request.

The PCUSA has had an obsessive antagonism to Israel for a number of decades. For example, at their 2018 General Assembly they passed resolutions referring to Israel as “a colonial project” and as “an apartheid state”. Just Googling “PCUSA and Israel” will provide easy access to these and other similar positions.

What caught me off guard was a particular statement in his email to the pastor.
“I don’t think the Old Testament nation of Israel and the present-day nation of Israel are equivalent. Nor should they be in my estimation.”

What was the intent of this claim? Was this meant as a historical statement or as a theological one? Did he mean to assert that the Jewish people of today are not descendants of the Biblical people of Israel? While this may ring true to most modern people who don’t see themselves as genetically descended from any particular nation from 3,000 years ago, it is a claim that presents a historical problem that I am not sure this General Presbyter has considered.
The history of Jewish continuity is a matter of record. Despite of a few relatively short gaps in the written record, there are continuous records of communal life from every century and almost every generation of Jews going back at least 1,500 years.
Let’s put it this way. I doubt that he was claiming that today’s Jews are not descendants of the Jews of, say, the 16th century, or the 12th century. This claim makes no sense at all. The genealogical record well known. Was he claiming that the Jews of the 10th century had no connection to the Jews of the 5th century at the end of the Talmudic era? Implausible, to say the least. And the Jews of the 2nd Temple period are easily connected to those of the Babylonian exile in the times of Ezra and Zechariah just prior.
Is his claim theological, rather than historical? If so, more questions abound. Perhaps with the advent of Christianity, Judaism is now irrelevant and therefore there are no Jews. If so, why did neither Luther in the 16th century nor Augustine in the 5th century make this claim? They and other Christian theologians were unabashed in their antipathy for the Jewish people. Why did they not make a similar assertion?
I believe that the answer lies in the point with which I began. The task of theology requires an assessment, not only of the Bible, but of reality around us. Luther had no reason to deny the Jewish lineage of the Jews around him. For Luther, the idea that the flesh and blood descendants of the Nation of Israel would one day return to the Land of Israel and take possession of it was so far-fetched that he could sarcastically pledge to convert to Judaism if it ever were to happen. It was easy to say that the Jews no longer have any kind of special covenantal relationship to the God of the Bible. The reality of the Jewish predicament in his time was enough to support his theology.
Our friend, the General Presbyter, has no such luxury. If he accepts the historical fact that the Jewish people today are the descendants of ancient Israel, the theological dominoes begin to fall. If the Jews are Biblical Israel, then the nation of Israel has, in fact returned to the land of Israel. If they have returned to the land after being “scattered to the ends of the heavens” (Deuteronomy 30:4), “taken possession of it”, and become “more numerous and more prosperous than [their] ancestors” (Deuteronomy 30:5), then what does this mean about the modern State of Israel? What does this mean about centuries of Christian supersessionist theology claiming that the Jews have no covenantal relationship to God anymore?

Rather than humbly deal with the implications of this theological upheaval, as many other Christians including the Catholic church have done, this General Presbyter chooses to invent a new solution to his conundrum.

According to Dr. Tricia Miller, a Christian academic who monitors Christian attitudes about Israel, this new claim that today’s Jews are not really Jews has been circulating for only the past twenty years or so in mainline Protestant circles. It is not difficult to identify the obviously political motives for this new idea.

The replacement theology of the past was supported by the reality of the Jewish predicament in a seemingly endless exile. However anti-Jewish, it was a justifiable interpretation of the realities of history as they seemed at the time.

With this theology now rendered untenable by current events, the antisemitic theologians of the PCUSA and their ilk have taken a new approach. Rather than adjust their theology based on the new realities that God has brought into the world in our time, they choose the reverse. They choose to reinterpret reality to suit their anti-Jewish theological stance. Rather than argue that the church has replaced Israel, they argue that there is no Israel at all.

It’s time to call this new approach by mainline Israel haters what it is: the denial of Jewish identity and Jewish history is the new theological antisemitism.