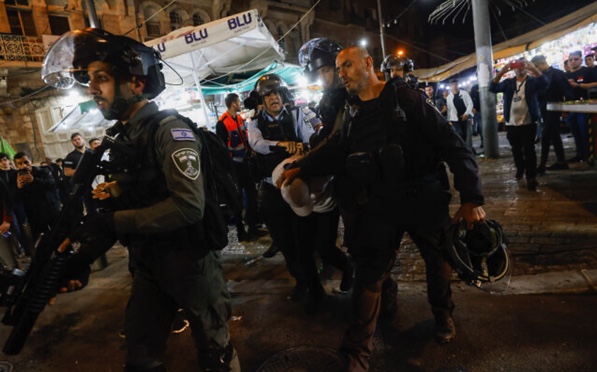 Police said six Palestinians were detained during clashes at the Damascus Gate entrance to Jerusalem’s Old City on Tuesday, as Palestinians gathered to celebrate Ramadan.

The suspects hurled stones and other items and launched fireworks at officers, police said.

It was the fourth night in a row of scuffles at Damascus Gate, an entrance to the Old City’s Muslim Quarter, a frequent point of friction and the site of many past terror attacks.

“Whoever chooses to disturb the order, riot, and engage in violence of any kind, harms first and foremost the large public of worshipers, merchants, and visitors, the vast majority of whom wished to celebrate Ramadan in peace and security, while maintaining freedom of worship,” police said in a statement.

“We will not allow those inciting and violent margins [of society] to disrupt order. We call on the public to mark the month of Ramadan legally, obey police instructions, and avoid violence and disturbances of any kind,” the statement said.