5 Palestinians arrested after crossing into Israel from Gaza 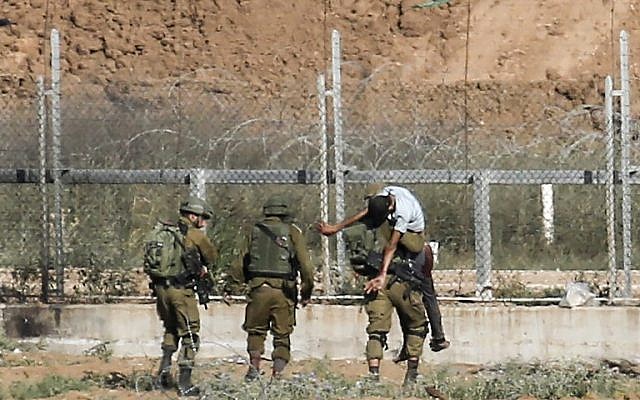 The Israel Defense Forces early Thursday morning apprehended five Palestinians who crossed the border from Gaza into the country.

The men were arrested at around 2 a.m. after breaching the fence in the south of the Gaza Strip and taken in for questioning, the military said.

In its brief statement, the army did not say that the men were armed.

In recent years, as the humanitarian conditions in the coastal enclave have worsened, Israeli security forces have arrested a number of Palestinians who have fled Gaza in favor of Israeli prisons.

In many cases, these Gazans enter Israeli territory with knives and explosives in order to make it more likely that they will be imprisoned for longer terms than if they had come unarmed.

In such cases, the Israeli military generally returns the Palestinians to the Gaza Strip.

Since last March, the Gaza border has seen large-scale weekly clashes on Fridays, smaller protests along the northern Gaza border on Tuesdays, as well as periodic flareups between the Israeli military and Palestinian terror organizations.

Israel says its actions are necessary to defend the border and stop mass incursions into its territory.