4 mortar shells fired from Gaza at Israeli towns; none injured 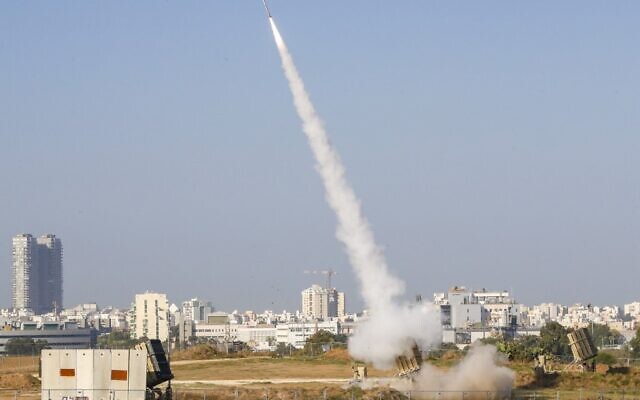 Two of the incoming projectiles were intercepted by the military’s Iron Dome air defense system. The other two appeared to strike open fields in Israel’s Sha’ar Hanegev region, east of northern Gaza.

The mortar attack shattered a period of relative calm along the border.

“Four launches were detected from the territory of the Gaza Strip toward Israeli territory. Aerial defense soldiers intercepted two of the launches,” the military said in a statement.

The attack triggered sirens in the Israeli communities of Sa’ad, Kfar Aza and Nahal Oz, sending hundreds of residents rushing to bomb shelters.

The round of mortar fire came three days since alarms last sounded in Nahal Oz, apparently due to heavy machine gun fire from the coastal enclave.

Israel has reportedly warned the Hamas and Palestinian Islamic Jihad terror groups against any attempted response to the US targeted killing of Iranian general Qassem Soleimani earlier this month.

Hamas, which rules the Gaza Strip, expressed its “sincere condolences” to Iran’s leadership after Soleimani was killed in Baghdad on January 3 and hailed his support for the “Palestinian resistance,” but did not issue any overt threat.

The Islamist group’s leader in Gaza, Yahya Sinwar, in the past lauded the “strong, powerful and warm” ties Hamas enjoyed with Soleimani, and spoke at the Iranian general’s funeral in Tehran.

The Iran-backed Islamic Jihad, which in November fought a two-day battle with Israel after one its military commanders was killed in an Israeli strike, has yet to respond.

Iran has for years sought to arm the Palestinian terror groups with rockets, mortars and missiles.

The US strike on Soleimani came amid efforts to broker a long-term ceasefire between Israel and Hamas, which have fought three wars since the terror group took control of Gaza in 2007.

Times of Israel staff contributed to this report.