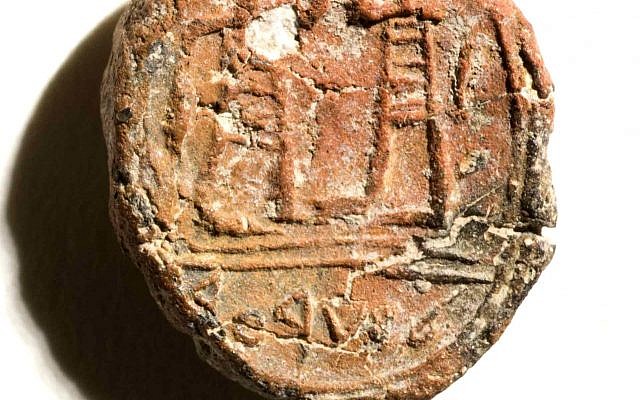 Past and present collided last week when an extremely rare seal impression discovered in Jerusalem’s Western Wall plaza and bearing the inscription “Belonging to the governor of the city” was presented to Jerusalem Mayor Nir Barkat.

According to site excavator Dr. Shlomit Weksler-Bdolah, “This is the first time that such an impression was found in an authorized excavation. It supports the biblical rendering of the existence of a governor of the city in Jerusalem 2,700 years ago.”

At the presentation, Barkat said, “It is very overwhelming to receive greetings from First Temple-period Jerusalem. This shows that already 2,700 years ago, Jerusalem, the capital of Israel, was a strong and central city.”

The minuscule clay seal impression, or docket, was found while researchers were examining the dust from a First Temple structure 100 meters northwest of the Western Wall at a site the Israel Antiquity Authorities has been excavating since 2005. The excavations have offered up insights into Jerusalem’s Second Temple and Roman periods, as well as a massive Iron Age four-room building where an eclectic collection of six other seals were uncovered, whose origins point to a thriving cosmopolitan Iron Age center or settlement.

“The seal impression had been attached to an important transport and served as some sort of logo, or as a tiny souvenir, which was sent on behalf of the governor of the city,” said Weksler-Bdolah in an IAA release.

The site, which faces the Western Wall plaza, was once earmarked as the future home of a Western Wall Heritage Foundation’s Beit HaLiba until Prime Minister Benjamin Netanyahu suspended the controversial museum “over security concerns” in 2015. However, in light of the “outstanding significance” of the finds at the excavation site, according to Dr. Yuval Baruch, archaeologist of the Jerusalem District in the IAA, a decision was made”to conserve the First Temple-period building exposed in the Western Wall plaza excavations and open it to visitors.”