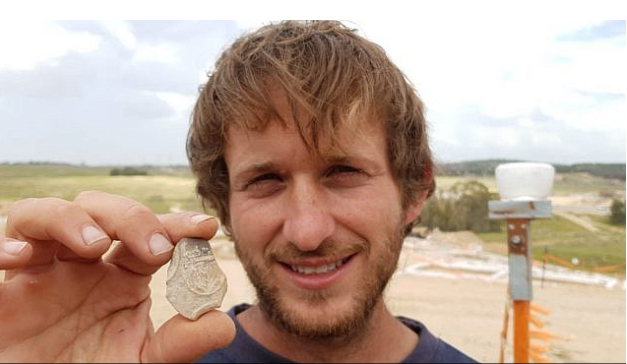 A rare well-preserved large Second Temple-period Jewish settlement, watchtower, and subterranean passages are currently being unearthed near Beersheba in Israel’s Negev Desert, the Israel Antiquities Authority announced Thursday. Among the artifacts uncovered at this important site is an intriguing depiction of a nine-stemmed menorah, which illustrates a sherd from an oil lamp.

According to IAA archaeologist Dr. Daniel Varga, “This is probably one of the earliest artistic depictions of a nine-branched menorah yet discovered.”

The site is dated to the 1st century CE and was settled until the Bar Kochba Revolt in 135 CE. According to the IAA press release, underground hidden passageways discovered there may have been used by Jewish rebels. Unearthed on the southernmost border of Judea next to a road that led from Tel Beer Sheva to the southern coastal plain, the 2-dunam (half-acre) site’s finds indicate a continuation of Jewish religious practice on the edges of the kingdom, such as ritual baths, stone vessels associated with laws of purity, and an abundance of pottery and lamps decorated with typical Jewish themes such as grape leaves.  Additional finds include olive and date pits and baking facilities.

Despite being on the fringes of Judea, the settlement was not free of the turmoil experienced throughout the Roman-occupied Holy Land during this era: “Signs of a conflagration discovered in some of the structures evince a crisis that the settlement experienced, probably that of the First Jewish Revolt in c. 70 CE,” said lead excavators, Dr. Peter Fabian of the Ben-Gurion University in the Negev and the IAA’s Varga.