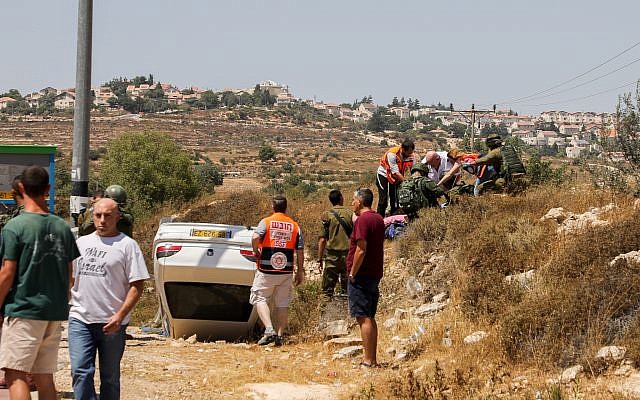 Two Israelis were hit by a car and injured on Friday while standing at a bus stop outside Elazar in the central West Bank, just south of Jerusalem, in what the military said was a terror attack.

A 17-year-old teenager was very seriously wounded and a woman, 19, was moderately hurt, the Magen David Adom ambulance service said.

The two were identified as siblings Nahum and Noam Nevis from Elazar.

They were treated at the scene; then the boy was evacuated to the Hadassah Ein Kerem Hospital and the woman was taken to Shaare Zedek Medical Center, both in Jerusalem.

The director of Hadassah, prof. Yoram Weiss said Nahum was in surgery fighting for his life, with a skull fracture and a brain injury.

Doctors at Shaare Zedek said Noam was conscious, but suffering from injuries to her limbs.

The car rolled over after the attack, and when the suspected attacker tried to emerge from it, he was shot dead by police at the scene, reports said.

“I hope we aren’t facing a new terror wave,” he was quoted as saying by Channel 12.

Israel Radio said the car appeared to have been a stolen vehicle.

Elazar is a settlement adjacent to Migdal Oz in the Etzion Bloc, where yeshiva student Dvir Sorek was stabbed to death last week in a suspected terror attack. Also nearby is the Etzion Junction, which has seen multiple fatal terror attacks in recent years.

The assailants were shot by security forces. One of them was pronounced dead at the scene; the second was critically wounded and taken to the hospital.

On Friday, Shaare Zedek, where the officer was being treated, said his condition had improved.

The attack came amid heightened tensions surrounding the Old City’s Temple Mount, following clashes at the holy site earlier in the week.

The Hamas terror group, in a statement on Friday’s attack, linked it to the recent unrest in Jerusalem, saying, “Our nation’s rising rage and the ramming and stabbing incidents are a response to the repeated stormings of the Al-Aqsa Mosque and the occupation’s ongoing crimes.”