2 Iranians accused of spying on Jewish, Israeli targets in US plead guilty 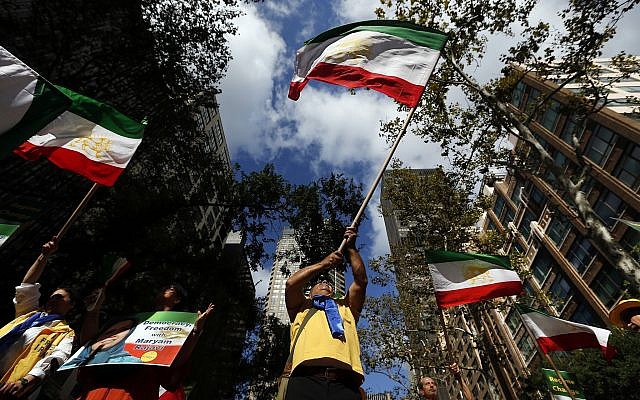 Two Iranians who were charged with collecting information on Israeli and Jewish targets in the US and on opponents of the Iranian regime have pleaded guilty to acting on behalf of Tehran, the US Justice Department announced Tuesday.

Ahmadreza Mohammadi-Doostdar, 39, a dual US-Iranian citizen, and Majid Ghorbani, 60, an Iranian citizen and resident of California, were arrested last year.

Doostdar is scheduled to be sentenced on December 17 and Ghorbani will receive his sentence on January 15.

As part of his plea, Doostdar admitted he traveled to the United States from Iran on three occasions to meet with Ghorbani and to convey directions for Ghorbani’s activities on behalf of Iran.

According to the indictment released by the Justice Department last year, Doostdar traveled to the United States from Iran in or around July 2017, with the aim of collecting intelligence on entities and individuals considered to be enemies of the Iranian regime.

This included Israeli and Jewish interests, as well as individuals linked to The People’s Mujahedeen (MEK), an Iranian opposition organization which was considered by the US to be a terror organization until 2012.

The indictment states that on or about July 21, 2017, Doostdar carried out surveillance and took photos at several Jewish centers in Chicago, including the Hillel Center and the Rohr Chabad House, where he is accused of taking detailed pictures of the security measures, and the Hillel Center.

The indictment does not name the Israeli targets.

Doostdar then traveled to California where he met Ghorbani, apparently for the first time, according to the indictment.

Two months later Ghorbani flew to New York for one day where he attended an MEK rally and took photographs of people in attendance.

In December 2017 Doostdar traveled back to California to get the MEK information. In conversations between them recorded by the FBI, Ghorbani mentioned trying to “penetrate” the group, while Doostdar spoke of being directed by others to collect the information.

“I will give it to the guys to do their research,” he said of the photographs.

The indictment says he paid $2,000 to Ghorbani in their meetings.

In March and April 2018, Ghorbani went to Iran where, according to the indictment, he briefed government officials on his information on MEK and received a list of “taskings” for infiltrating the dissident group.

Last May, Ghorbani attended the MEK-supported Iran Freedom Convention for Human Rights in Washington as part of the California delegation, where he also took pictures of attendees, including while posing in front of the White House.

Doostdar and Ghorbani were both charged with acting as unregistered agents of the Iranian government and providing the Iran government with services in violation of sanctions.

Last July it was reported that Israel’s Mossad spy agency thwarted a plan to bomb a June 30 conference organized by the MEK in Paris. The operation led to the arrest of a cell headed by an Iranian diplomat.