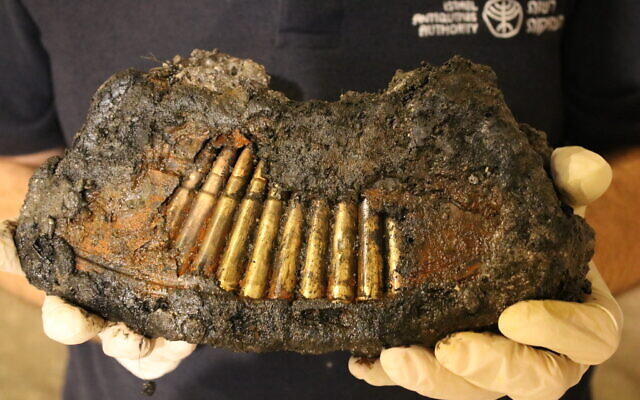 A Jordanian ammunition stash dating back to the Six Day War was discovered in an archaeological dig near the Western Wall on Wednesday, the Western Wall Heritage Foundation and Israel Antiquities Authority announced.

The archaeologists were excavating a British Mandate period water cistern under the lobby of the Western Wall Tunnels site, when they came across the material. The ammunition stash (known as a “slick”) included 10 full magazines of Bern light machine-guns, full clip chargers and two bayonets of a British Lee Enfield rifle.

Similar weapons were found a year ago in a different water cistern nearby.

“Usually, in excavations, we find ancient findings from one or two thousand years ago, but this time, we got a glimpse of the events that occurred 53 years ago, frozen in time in this water cistern,” commented Dr. Barak Monnickendam-Givon and Tehila Sadiel, who head the excavations on behalf of the IAA.