Trump announces he will not recertify Iran nuclear accord 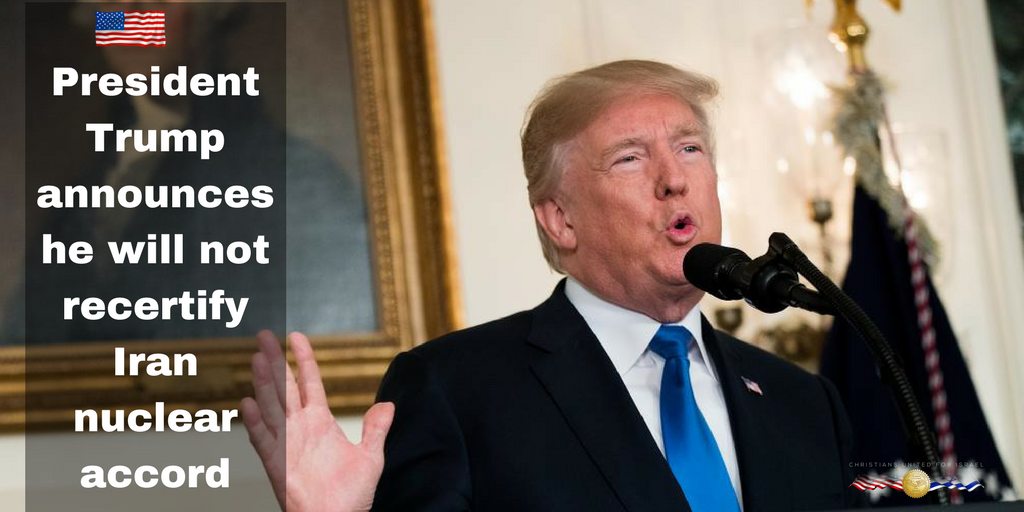 US President Donald Trump announced Friday that he would not recertify the Iranian nuclear deal, while not withdrawing from the pact, and outlined a new, tougher approach toward Tehran.

Trump said he was launching a tougher strategy to check Iran’s “fanatical regime” and warned that 2015’s landmark international nuclear deal could be terminated at any time.

In a much-anticipated White House speech, Trump stopped short of withdrawing from the accord, but “decertified” his support for the agreement and left its fate in the hands of Congress.

“We cannot and will not make this certification,” he said. “We will not continue down a path whose predictable conclusion is more violence, more terror and the very real threat of Iran’s nuclear breakout.”

And, outlining the results of a review of efforts to counter Tehran’s “aggression” in a series of Middle East conflicts, Trump ordered tougher sanctions on Iran’s Revolutionary Guards Corps and on its ballistic missile program.

Trump said the agreement, which defenders say was only ever meant to curtail Iran’s nuclear program in return for sanctions relief, had failed to address Iranian subversion in its region and its illegal missile program.

The US president said he supports efforts in Congress to work on new measures to address these threats without immediately torpedoing the broader deal.

“However, in the event we are not able to reach a solution working with Congress and our allies, then the agreement will be terminated,” Trump said, in a televised address from the Diplomatic Room of the White House. “It is under continuous review and our participation can be canceled by me as president at any time,” he warned.

Simultaneously, the US Treasury said it had taken action against the Islamic Revolutionary Guards under a 2001 executive order to hit sources of terror funding and added four companies that allegedly support the group to its sanctions list.

Trump said he planned to ensure “Iran never — and I mean never — acquires a nuclear weapon.”

He accused the Obama administration of lifting sanctions on Iran as part of the 2015 nuclear accord “just before” they could cripple the regime and bring it to collapse.