Using ingenuity to overcome its serious water challenges, Israel has become the go-to expert for a world facing an impending water crisis.

This year’s WATEC  expo and conference, to be held in September in Tel Aviv, is expected to attract 10,000 stakeholders from 90 countries seeking Israeli solutions for water issues.

Israel exports $2.2 billion annually in water technology and expertise. In addition, these commodities are shared on a humanitarian basis through training courses, consultations and projects.

Keren Kayemeth L’Israel-Jewish National Fund (KKL-JNF) often hosts delegations from around the world – most recently, from California, Argentina and the European Policy Center – to see how Israel’s system of treatment facilities and 230 reservoirs has achieved the world’s highest ratio of wastewater reuse.

About 92% of Israeli wastewater gets treated and 75% is used for agricultural irrigation. Israel plans to recycle 95% of its wastewater for irrigation by the end of 2025.

“During the 1980s, recycling wastewater was a revolutionary concept and many people were skeptical. Today, nearly half of the irrigation in Israel comes from recycled wastewater,” says KKL-JNF Development Project Director Yossi Schreiber.

2. IsraAID  launched its WASH (Water, Sanitation and Hygiene) project about four years ago to tailor-make solutions for communities from Fiji to Haiti to Myanmar.

In the rain-dependent South Pacific island nation of Vanuatu, a March 2014 cyclone contaminated reservoirs and destroyed water harvesting systems. Among other steps, IsraAID strategized the engineering of a low-tech gravity system, built and maintained by locals, to bring water from mountain springs down into two villages encompassing more than 600 people and one school. IsraAID is working with the World Bank to construct three more gravity systems.

In Kenya’s Kakuma Refugee Camp and Uganda’s Gulu township, which struggle with waterborne disease and water contamination, IsraAID trains unemployed or underemployed people to be water technicians. Graduates work with local NGOs or water companies, or start their own businesses, to contribute their new expertise in anything from drilling wells and building latrines to teaching
hygiene. 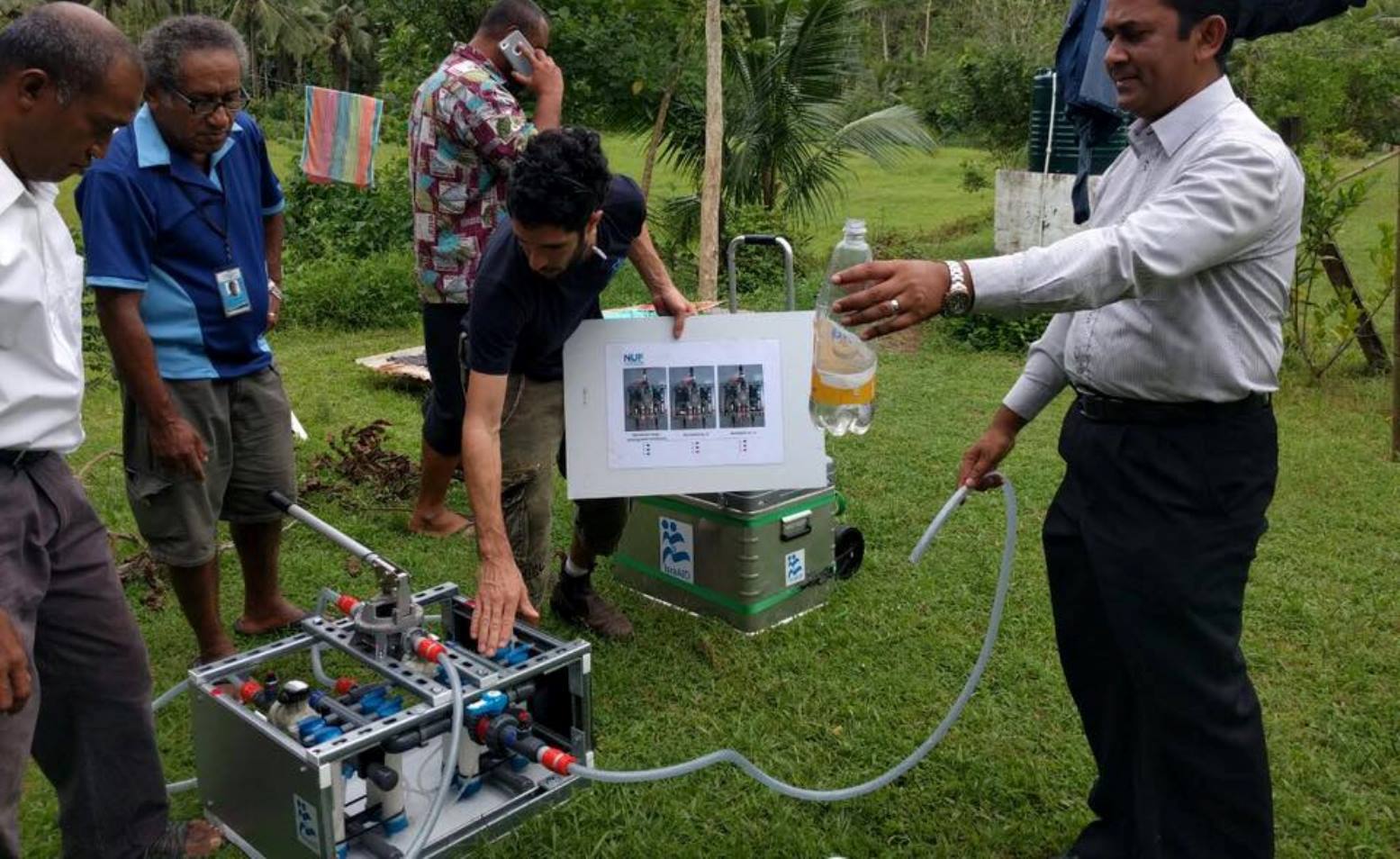 3. A massive landslide in September 2015 damaged a major irrigation canal partially built by Israeli NGO Tevel b’Tzedek in an impoverished Nepali village. Tevel staff repaired the damage with funding from the Rochlin Foundation and Jewish Coalition for Disaster Relief, and worked with the local water council to strengthen the canal walls, reestablishing and assuring water supply to 224 households (about 1,300 people) and subsistence farmers.

Also in Nepal, Tevel is fighting the effects of flash floods – which deplete water available for drinking and irrigation — by building irrigation pools and setting up zero water waste systems enabling villagers to conserve water through Israeli methods, including drip irrigation learned by Tevel’s native Nepal director at Ben-Gurion University of the Negev. Tevel also is teaching village farmers less water-intensive professions, such as beekeeping.

6. MASHAV’s special envoy for water and food security went to Swaziland last week with the director of overseas training, programs and research at MASHAV-affiliated Center for International Agricultural Development Cooperation to conduct a water survey by request of Swaziland’s prime minister. The experts are identifying possible areas of cooperation in combatting drought and a shortage of water for agriculture.

7. Following a May 2016 earthquake in Ecuador, IsraAID brought a new Israeli water-purification technology from NUFiltration  to several affected villages. Instead of having to buy bottled drinking water, residents can use the NUF system to turn washing water into purified drinking water without electricity. NUF was first piloted by the company in Ghana as a humanitarian project to prevent diseases from contaminated water.

8. The Tel Aviv University chapter of Engineers without Borders designed and built a rainwater collection and purification system in a Tanzanian village where the drinking water had dangerously high amounts of fluoride. Since the project was finished in 2014, it has been supplying safe drinking water to more than 400 children daily.

9. The Technion Engineers without Borders chapter designed and implemented a safe drinking-water system serving more than 600 Ethiopian schoolchildren in a rural village with no reliable source of water for drinking and handwashing. The Israelis taught the older children how to maintain the system and treat the water, and continue to provide support to assure a safe and sustainable water supply.

10. In June 2015, the Israeli Ministry of Economy committed $500,000 to the World Bank Group’s Water Global Practice to help developing countries overcome complex water security challenges. The agreement has included two years of study tours and other activities for World Bank staff and officials of various governments.

“Israel has had to manage water services while operating under extreme scarcity conditions, and has done so very impressively,” said Jennifer Sara, director for water at the World Bank, at the agreement signing in Washington. “Its innovative practices are globally recognized — both from technological and institutional perspectives — and will undoubtedly carry lessons for many of the World Bank Group’s clients facing water security challenges.”