Even though God’s promises to Abraham and his descendants, the Jewish people, are very clear in Scripture, there are still some who reject this teaching. They believe that the Church has replaced Israel as those who will inherit God’s promises, instead of what we read in Romans 11, that the Church has been grafted in. They teach that there is no longer any spiritual significance to the Jewish people, the land of Israel, or the nation of Israel today and that God removed His promises from Israel entirely. Replacement theology is not biblical and is, in fact, extremely harmful.

You will need a Bible for this activity. Look up the following passages to better understand the Lord’s covenant with Abraham and the Jewish people, and how that applies today.

These passages teach us that God is unfailing in His faithfulness. He never revoked His covenant with the Jewish people, even when confronted with their disobedience, but confirmed His covenant is still in place (Ezekiel 36). Because these promises have not been completely fulfilled yet, there remains a “hope and future” for Israel and the Jewish people (Jeremiah 29:11). We can be confident that our God is faithful even to all generations (e.g., Psalm 100:5).

Unfortunately, despite this clear teaching in Scripture and Paul’s warning in Romans 11, replacement theology still developed and flourished within the church. Many of the early church fathers blamed the Jewish people as a whole for “killing” Jesus and argued that because Jews in their day rejected Jesus, God has rejected the Jews forever.

Replacement theology did not go away when Paul warned the Romans about it, nor did it go away after the early church fathers died. It lives on in churches today. Yet its effects are startling and can even be deadly. Replacement theology played an important role in the persecution of Jews in The Crusades as well as in Hitler’s Nazi Germany, and ultimately, in the tragedy known as the Holocaust. Hitler himself claimed to be a Christian and justified his crazed mass murder of the Jews with a distorted, twisted form of Christianity. 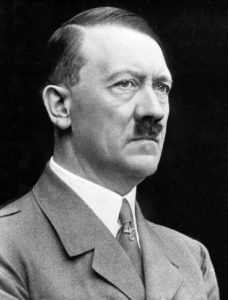 The excerpt from The Speeches of Adolf Hitler by Norman H. Baynes.

My feeling as a Christian points me to my Lord and Savior as a fighter. It points me to the man [Jesus] who once in loneliness, surrounded only by a few followers, recognized these Jews for what they were and summoned men to fight against them and who, God’s truth! was greatest not as a sufferer but as a fighter. In boundless love as a Christian and as a man I read through the passage which tells us how the Lord at last rose in His might and seized the scourge to drive out of the Temple the brood of vipers and adders. How terrific was his fight against the Jewish poison.

Today, after two thousand years, with deepest emotion I recognize more profoundly than ever before the fact that it was for this that He had to shed his blood upon the Cross. As a Christian I have no duty to allow myself to be cheated, but I have the duty to be a fighter for truth and justice. And as a man I have the duty to see to it that human society does not suffer the same catastrophic collapse as did the civilization of the ancient world some two thousand years ago—a civilization which was driven to its ruin through this same Jewish people.

Pastor Hagee visited Israel in 1978 as a tourist and came back an avid Zionist. In 2006, he and his wife Diana held the first ever Night to Honor Israel at their church in San Antonio, Texas. Pastor Hagee founded Christians United for Israel in 2006 with just 400 pastors and ministry leaders. It was a grassroots church movement designed to unify Christians across all denominational and cultural boundaries in support of Israel and the Jewish people. Within six years, the organization reached one million members. As CUFI’s message resonated with Christians and empowered them to become educated political advocates, they grew exponentially. After just 14 years, CUFI has grown to over eight million members.

CUFI was founded on the promise of Genesis 12:3, to be studied in the next lesson, in which God says to Abraham: “I will bless those who bless you, and those who curse you I will curse.” CUFI believes that it is our God-given mandate to bless Israel and the Jewish people.

Israel and the Jewish people still face opposition from every side on a daily basis. Throughout these lessons, we will unpack Israel’s history and the many hardships that the Jewish people face today. We will see that God’s command to bless Israel, pray for the peace of Jerusalem, and love the Jews whose tree we have been grafted into still applies to Christians today. So, let’s obey.

In obedience to Psalm 122:6, pray for the peace of Jerusalem.

Options for Further Study and Reflection

Option #1: Read excerpts from On the Jews and their Lies by Martin Luther (1545), available to download online or for purchase in an anthology of Luther’s work, and create bullet points of the accusations that Luther makes against the Jews. Next, answer the following questions:

Option #2: Read CUFI’s Primer “The Dangerous Doctrine of Replacement Theology.” Reflect on the following questions and write a paragraph in response to each:

Option #3: Write a short response to the following prompt.

Using the passages studied in this lesson, explain replacement theology and why it is unbiblical. Describe what the relationship between Jews and Christians should be like and what that means for you as a Christian today.

To enhance your understanding of replacement theology, you can review Romans 9-11 and Hebrews 6:9-20.

I ask then: Did God reject his people? By no means! I am an Israelite myself, a descendant of Abraham, from the tribe of Benjamin. 2 God did not reject his people, whom he foreknew. Don’t you know what Scripture says in the passage about Elijah—how he appealed to God against Israel: 3 “Lord, they have killed your prophets and torn down your altars; I am the only one left, and they are trying to kill me”? 4 And what was God’s answer to him? “I have reserved for myself seven thousand who have not bowed the knee to Baal.” 5 So too, at the present time there is a remnant chosen by grace. 6 And if by grace, then it cannot be based on works; if it were, grace would no longer be grace.

7 What then? What the people of Israel sought so earnestly they did not obtain. The elect among them did, but the others were hardened, 8 as it is written:

“God gave them a spirit of stupor,
eyes that could not see
and ears that could not hear, to this very day.”
9 And David says:
“May their table become a snare
and a trap, a stumbling block and a retribution for them.
10 May their eyes be darkened so they cannot see,
and their backs be bent forever.”

13 I am talking to you Gentiles. Inasmuch as I am the apostle to the Gentiles, I take pride in my ministry 14 in the hope that I may somehow arouse my own people to envy and save some of them. 15 For if their rejection brought reconciliation to the world, what will their acceptance be but life from the dead? 16 If the part of the dough offered as firstfruits is holy, then the whole batch is holy; if the root is holy, so are the branches.

17 If some of the branches have been broken off, and you, though a wild olive shoot, have been grafted in among the others and now share in the nourishing sap from the olive root, 18 do not consider yourself to be superior to those other branches. If you do, consider this: You do not support the root, but the root supports you. 19 You will say then, “Branches were broken off so that I could be grafted in.” 20 Granted. But they were broken off because of unbelief, and you stand by faith. Do not be arrogant, but tremble. 21 For if God did not spare the natural branches, he will not spare you either. (New International Version, Romans 11:1-21).

Even though we speak like this, dear friends, we are convinced of better things in your case—the things that have to do with salvation. 10 God is not unjust; he will not forget your work and the love you have shown him as you have helped his people and continue to help them. 11 We want each of you to show this same diligence to the very end, so that what you hope for may be fully realized. 12 We do not want you to become lazy, but to imitate those who through faith and patience inherit what has been promised.

13 When God made his promise to Abraham, since there was no one greater for him to swear by, he swore by himself, 14 saying, “I will surely bless you and give you many descendants.” 15 And so after waiting patiently, Abraham received what was promised.

16 People swear by someone greater than themselves, and the oath confirms what is said and puts an end to all argument. 17 Because God wanted to make the unchanging nature of his purpose very clear to the heirs of what was promised, he confirmed it with an oath. 18 God did this so that, by two unchangeable things in which it is impossible for God to lie, we who have fled to take hold of the hope set before us may be greatly encouraged. 19 We have this hope as an anchor for the soul, firm and secure. It enters the inner sanctuary behind the curtain, 20 where our forerunner, Jesus, has entered on our behalf. He has become a high priest forever, in the order of Melchizedek. (New International Version, Hebrews 6:9-20).