American Attitudes Towards the Middle East 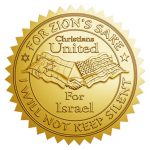 Today, GS Strategy Group released a poll in conjunction with Christians United for Israel. The telephone survey was conducted April 26-29, among 800 likely voters nationally. 60% of the interviews were conducted by cell phone. The margin of error for the survey is +/- 3.46% at the 95% confidence level.

In a survey completed immediately prior to the start of an unrelenting wave of terror attacks by Hamas and Palestinian Islamic Jihad against the people of central and southern Israel, a nationwide survey of likely voters shows that concern for and affinity with Israel remains high across the political spectrum, and support for a strong U.S. policy toward Iran enjoys robust support.

“Our friend and democratic ally Israel deserves U.S. support in its battle against terrorist organizations, and clearly the majority of the American people agree that it must retain the sovereign right to self-defense and enjoy the benefits and duties that it extends. Americans want the U.S. to support Israel’s sovereignty and existence as a democracy. Now that must translate into unequivocal support for degrading the terrorist threat,” said CUFI Founder and Chairman Pastor John Hagee 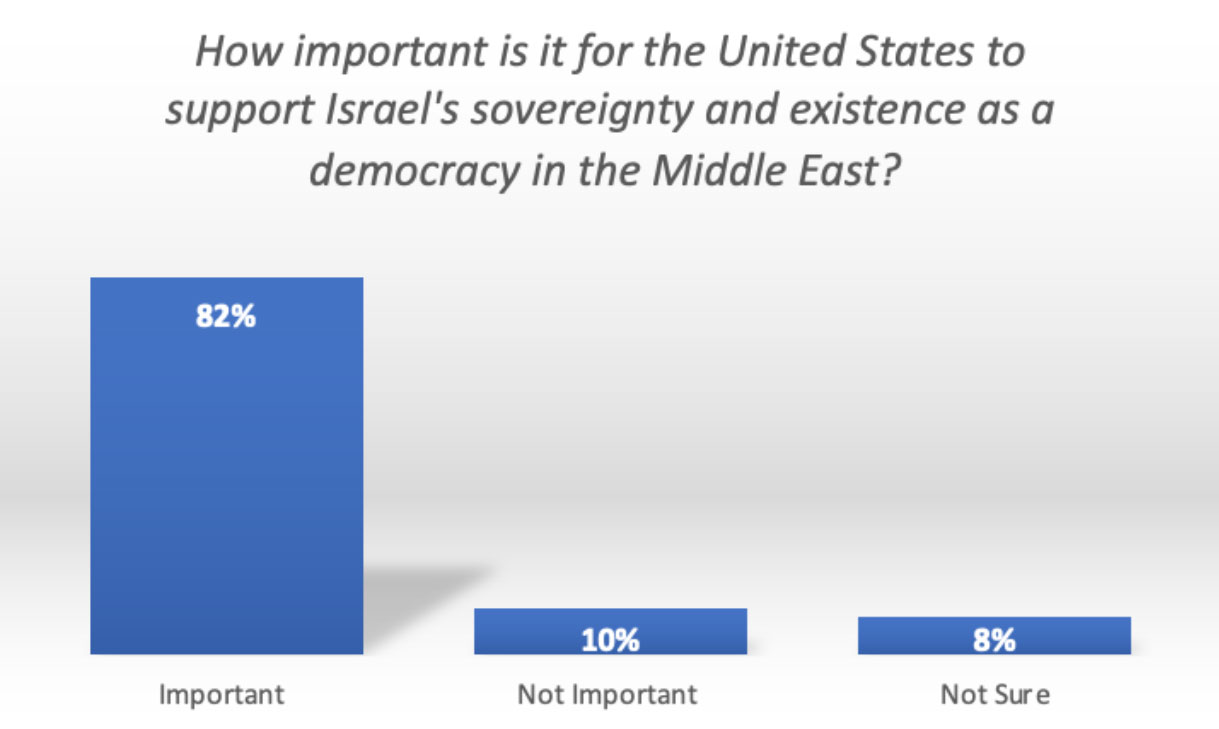 Israel’s sovereignty obligates others to respect its security and permits it to act in self-defense against hostile powers and terrorist organizations, including Iranian proxy forces Hamas and Palestinian Islamic Jihad. 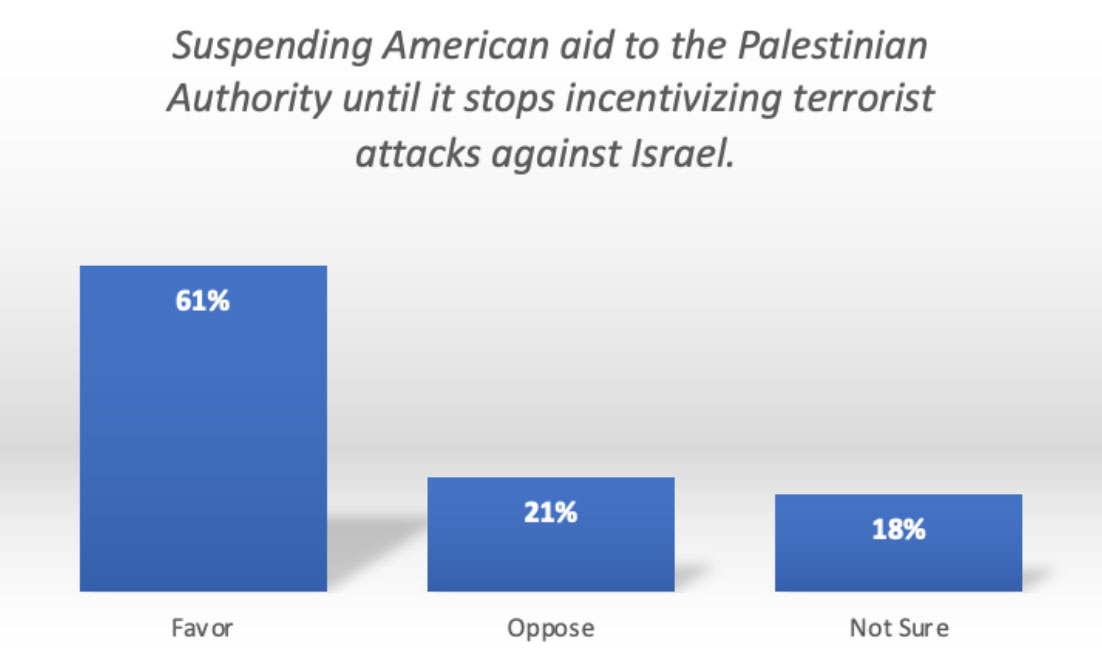 Americans oppose that decision by a margin of nearly three to one. Democrats favor suspending U.S. aid to the Palestinian Authority until it stops incentivizing terror by 27 points. More than half of all liberal Democrats approve of a suspension. Moderates and conservatives back a suspension by 54 percent and 73 percent, respectively.

“It is nauseating to imagine U.S. taxpayer dollars going to an entity that incentivizes the murder of innocent people, but that’s exactly what restoring U.S. aid to the Palestinians would do. Money is fungible, and it is reasonable to conclude that even if the U.S. is not directly supporting the ‘pay to slay’ program, that more money for terrorists and their families will be made available once our check clears. President Biden is out of step on this matter, even among members of his own party. He should declare that U.S. aid is suspended in the name of federal law,” said CUFI Action Fund Chairwoman Sandra Parker

Concern, too, of the threat a nuclear armed Iranian regime would pose to U.S. national security registers as one of the largest concerns among Democrats, Republicans and independents.

The intensity of concern about a nuclear Iran is only matched by the threat of a nuclear North Korea. Asked to rate possible threats to the vital interests of the U.S. over the next decade, 57 percent of likely voters rate both between 8-10 on a 10-point scale. Americans are also clear-eyed on what actions should be taken to mitigate the threat from Tehran once they’ve learned that Iran has violated the deal that the U.S. withdrew from in 2018.

A clear majority of likely voters – 65 percent – said that the U.S. strategy of imposing new economic sanctions targeting Iran’s support for terrorism and terror financing, and taking a harder line against Iran’s military leaders, was the right approach. That support cuts across party lines and threat perceptions. Democrats support maintaining the post-2018 U.S. posture by a margin of 31 points, independents by 43 points, and Republicans by 66 points. Even among those who rank the threat of a nuclear Iran at the lowest possible level, 50 percent favor the post-2018 U.S. posture.

As the Biden Administration continues to engage with the United Kingdom, France, Germany, Russia, and China – and indirectly with Iran – over re-entry into the JCPOA, the survey results show that Americans expect the president to maintain a hard line against the Iranian regime.

In fact, when asked to choose between the U.S. renewing the JCPOA or maintaining sanctions against Iran, 56 percent favor maintaining the sanctions. Support for doing so is a majority opinion by voters that have a moderate or conservative ideology as well as all those who say the U.S. relationship with Iran is fair or poor.

Further, a majority of Republicans, independents, and Democrats support using economic and military sanctions to pressure Iran to end its weapons program, stop supporting terrorism, and improve its record on human rights. Just 26 percent said that the U.S. should lift nuclear and/or terrorism-related sanctions and return frozen Iranian assets as a means of persuading it to end its malign behavior. “The American people want action against Iran because it is one of the greatest threats to our national security. But just any action won’t do. Voters of all political ideologies firmly support maintaining existing U.S. sanctions against Iran and using sanctions to pressure Iran into ending its malign behavior,”
said CUFI Founder and Chairman Pastor John Hagee

Owing to the importance of ensuring that any deal represents the national security interests of the United States and remains politically durable, an overwhelming majority of Americans favor that any deal made between the U.S. and Iran be presented to the Senate for ratification as a treaty. Democrats are resolutely in favor of the Senate voting on whether to adopt a deal as a treaty by a margin of 52 points. As a whole, 63 percent of Americans favor having any deal be submitted to the Senate.

“Nuclear arms agreements dating back to the Kennedy Administration have been submitted to the U.S. Senate to be voted upon as a treaty. It was a mistake for President Barack Obama to try to bypass the Senate, but President Biden can learn from that mistake. He can and should commit to sending any negotiated agreement with Iran over its nuclear program to our elected representatives. That’s what voters in his party want, and it’s what the American people expect,” said CUFI Action Fund Chairwoman Sandra Parker 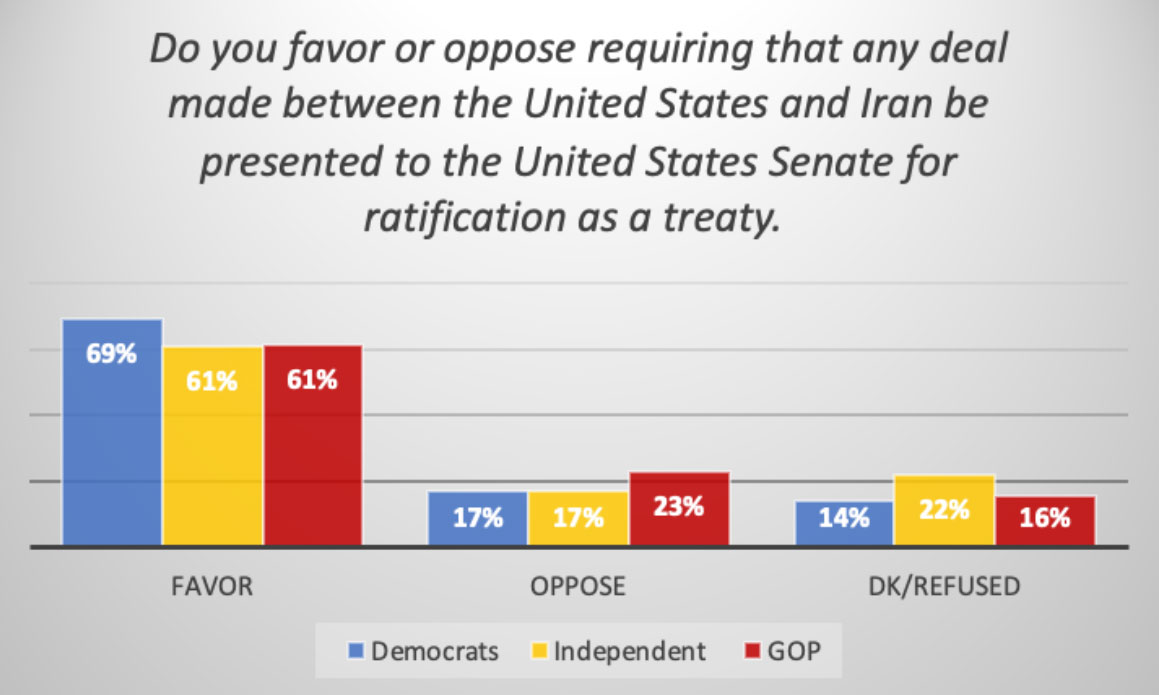 Recently, there has been discussion about the United States returning to the 2015 deal that would ease sanctions. Having heard this, which of the following comes closest to your opinion?

30%    The United States should renew its agreement with Iran

56%    The United States should maintain sanctions against Iran 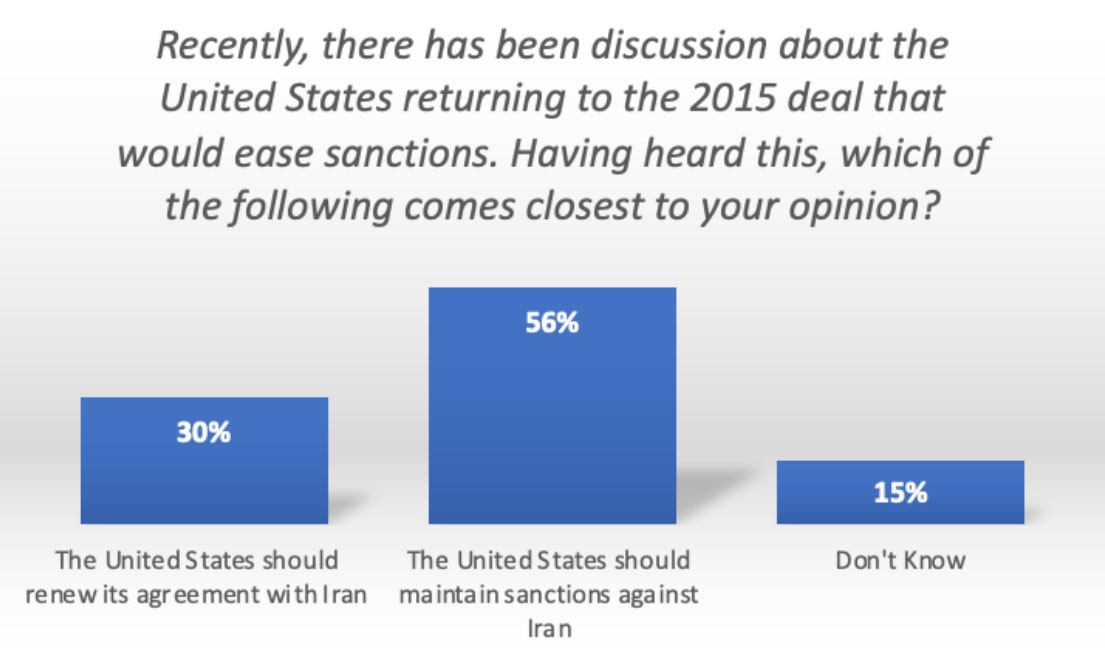 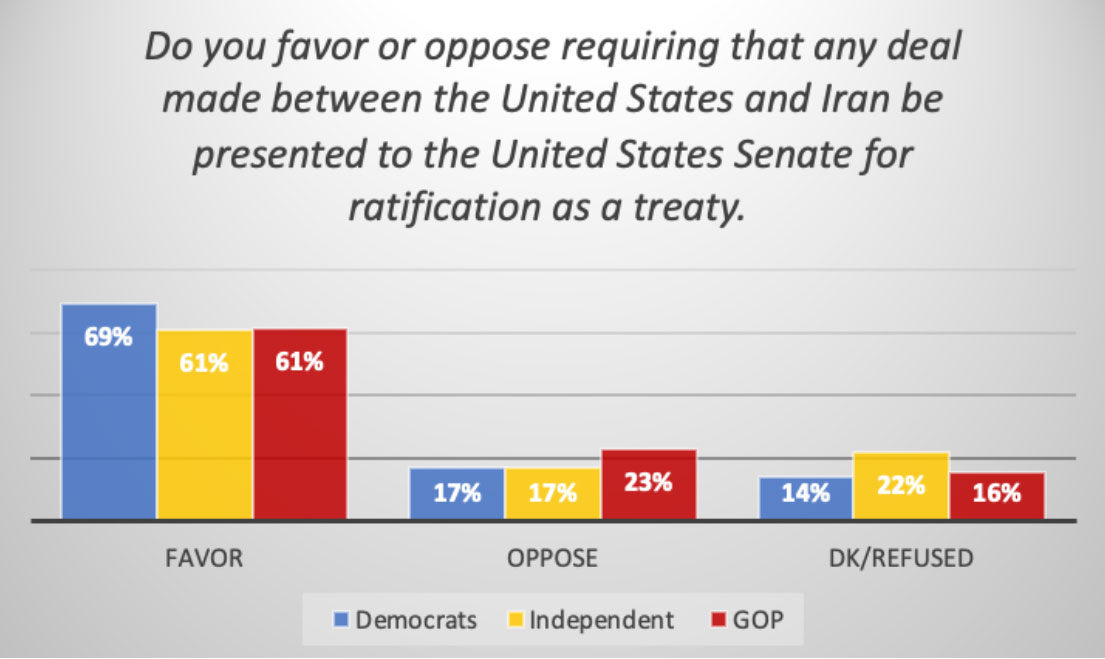 Over the past year or so, would you say the country of Turkey under President Erdogan has become more like a democracy or more like a dictatorship? 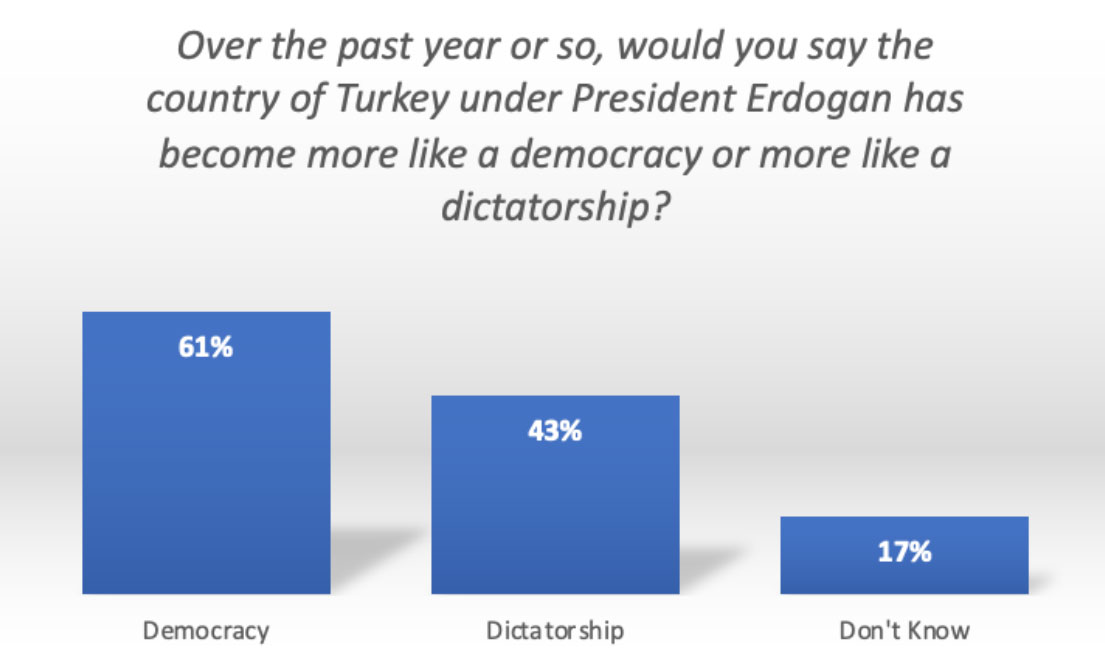 With which political party are you registered or affiliated? Thinking only of the period of time since President Biden took office, how would you rate the United States’ relationship with Iran – excellent, good, fair, or poor? If you don’t know, just say so. On a scale from 1 to 10 with one being not a threat and 10 being a critical threat, how big of a threat is Islamic terrorism to the vital interests of America in the next 10 years? On a scale from 1 to 10 with one being not a threat and 10 being a critical threat, how big of a threat is more war in the Middle East to the vital interests of America in the next 10 years? On a scale from 1 to 10 with one being not a threat and 10 being a critical threat, how big of a threat is a nuclear Iran to the vital interests of America in the next 10 years? How important is it for the United States to support Israel’s sovereignty and existence as a democracy in the Middle East? Suspending American aid to the Palestinian Authority until it stops incentivizing terrorist attacks against Israel. Relieving sanctions against Iran in exchange for an agreement they would not pursue nuclear weapons, but also requiring increasing protection for human rights and decreasing their support for terrorism.