Connection to the Land

Connection to the Land

Part I: Getting to Know Ancient Israel

Note to the Reader: This is not a Jewish history class or class on ancient history, so this booklet does not cover in-depth Joseph, Moses, the Exodus from Egypt, the Roman conquest of Jerusalem, etc. However, it is important to be generally familiar with certain key events in Israel’s history in order to understand the historic connection of Jews to the land. Review the timeline below. It will provide you with an overview of key events in the Old Testament. If there are any events that are unfamiliar to you, we recommend you spend some time researching them further online. As you observe the events listed on the timeline, consider how they may have affected the Jewish people. 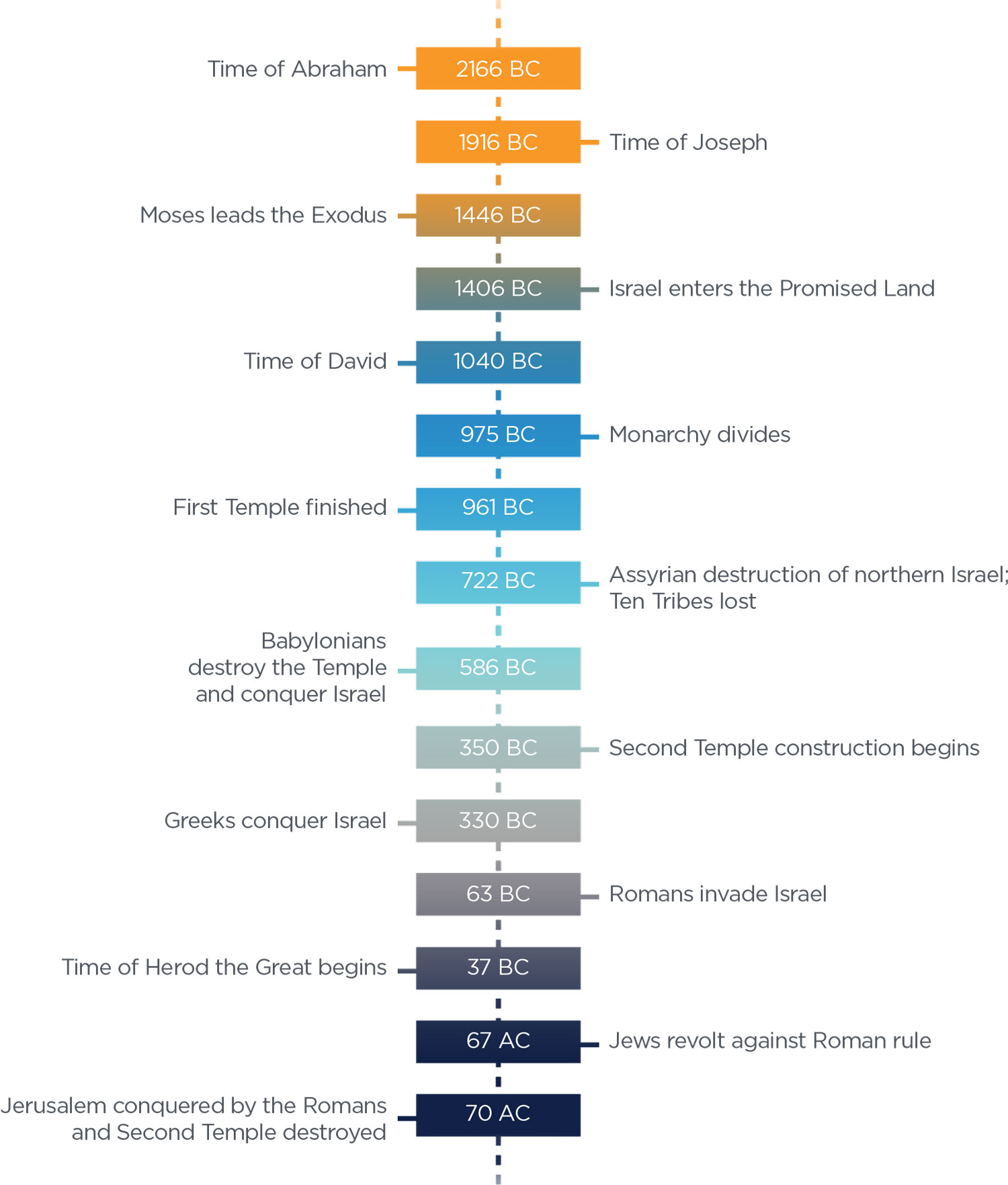 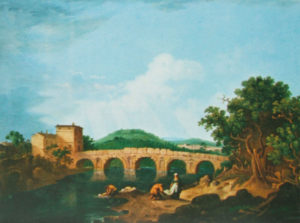 Painting of Abraham returning to the land of Canaan, illustration from a Bible card originally published 1907 by the Providence Lithograph Company. Photo credit: Wikimedia Commons.

We know from our previous study of Genesis that God promised the land of Canaan, known today as Israel, to Abraham and his descendants as “an everlasting possession.”

Israel is the only nation in the history of the world that was created by a sovereign act of God. Israel is the only nation in the world that has its borders recorded in the sacred text of Scripture. And most importantly—the Jewish people are the only people that have been given a specific piece of real-estate as an eternal and everlasting possession through a blood covenant with God Almighty. Simply stated, God gave to Israel the title deed to the land (Genesis 17:7-8, see also Genesis 13:14-18). 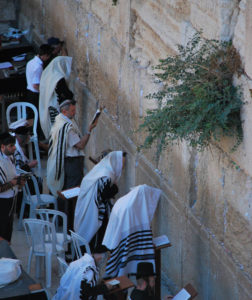 Thus, the Jewish connection to Israel dates back 4,000 years. Abraham journeyed to Canaan based on God’s command and lived with his family in Shechem. After the Exodus from Egypt, Joshua took on Moses’ role as leader of the Jewish people and led the Jews to victory over the Canaanites at Jericho, following God’s command to conquer the land and take possession of it (see Joshua 1:1-9.) The land, as the fulfillment of God’s promise to the Jewish people, naturally was a key influence on the development of Judaism and Jewish peoplehood.

Key aspects of Jewish law are directly related to Israel and can only be fulfilled by Jews living in the land. For example, if Jews are in control of the land, they must observe certain agricultural practices. If they are not in control, then they follow another set of rules. As part of their liturgy, Jews pray three times a day for a return to Israel and Jerusalem; Jews face Jerusalem when they pray. Many Jewish holiday observances are uniquely tied to the land. As we mentioned before, the Haggadah, one of the key elements of the Jewish Passover seder, features as one of the last prayers “L’shana haba b’Yerushalayim,” or “Next year in Jerusalem.” (Pronounced: le-sh-ah-nah hah-baah-ah beh-yer-u-sha-lie-im.) This prayer is repeated on Rosh Hashanah, the Jewish New Year.

The Passover seder is a core ritual to Jews around the world. The words “next year in Jerusalem” have resonated with meaning throughout the exile, and hold even more meaning now that the Jewish people have a State of their own. 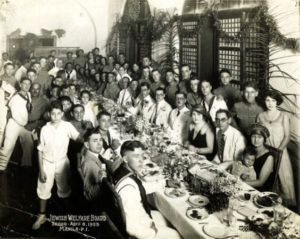 The connection to the Land of Israel is woven into the fabric of Jewish life. It is foundational to how the Jewish people express not only their devotion to God, but their very identity as a people. Even after the Romans destroyed the Temple and expelled most of the Jews from ancient Israel, the Jewish connection to Israel was maintained and nurtured. While small communities of Jews remained in the land, many others became part of the Jewish diaspora and scattered throughout the world.

Diaspora is most often used to describe the Jewish people in the wake of the Roman conquest of Israel. The Hebrew word that describes the Jewish diaspora, “galut,” means “exile from the land.” There is a long Jewish tradition of believing that Jews who do not live in Israel live in an unnatural state, because they are divorced from the land given to them by God.

The Jews in the diaspora, while they did adopt some local customs, lived in their own communities, which enabled them to follow their religious traditions. More often than not, Jews had no choice but to live apart, due to the virulent anti-semitism which characterized many, if not most, of the countries in which they lived.

The book of Lamentations, which many believe was written by the “weeping” prophet Jeremiah after the fall of Jerusalem to Babylon in 586 B.C.E., describes in stunning poetry the profound sense of loss experienced by the Jews while in exile. Jeremiah writes:

1 How deserted lies the city, once so full of people! How like a widow is she, who once was great among the nations! She who was queen among the provinces has now become a slave.

2 Bitterly she weeps at night, tears are on her cheeks. Among all her lovers there is no one to comfort her. All her friends have betrayed her; they have become her enemies.

3 After affliction and harsh labor, Judah has gone into exile. She dwells among the nations; she finds no resting place. All who pursue her have overtaken her in the midst of her distress.

4 The roads to Zion mourn, for no one comes to her appointed festivals. All her gateways are desolate, her priests groan, her young women grieve, and she is in bitter anguish.

5 Her foes have become her masters; her enemies are at ease. The Lord has brought her grief because of her many sins. Her children have gone into exile, captive before the foe.

6 All the splendor has departed from Daughter Zion. Her princes are like deer that find no pasture; in weakness they have fled before the pursuer.

7 In the days of her affliction and wandering Jerusalem remembers all the treasures that were hers in days of old. When her people fell into enemy hands, there was no one to help her. Her enemies looked at her and laughed at her destruction.

Anti-Semitism, at its most basic, can be defined as:

The Jewish people, despite a 2,000-year exile from their homeland and a history marked by violent attacks against them, maintained their connection to Israel. For example, this longing for Israel and hope for a return characterized the Jewish communities living in exile throughout the world. Israel represented the land of their ancestors, a place where they were in more perfect connection to God and themselves. This longing would eventually inspire one of the most miraculous events of recent history: the establishment of a modern Jewish state in the land of Israel. 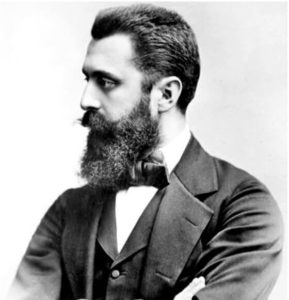 Theodor Herzl, whom many consider the founder of modern Zionism, said, “I believe that I understand Anti-Semitism, which is really a highly complex movement. I consider it from a Jewish standpoint, yet without fear or hatred…I think the Jewish question is no more a social than a religious one… It is a national question, which can only be solved by making it a political world-question to be discussed and settled by the civilized nations of the world in council. We are a people—one people. We want to lay the foundation stone, for the house which will become the refuge of the Jewish nation. Zionism is the return to Judaism even before the return to the land of Israel.”

Many anti-Israel advocates claim that Jews only came to Israel after the Holocaust. But there is extensive biblical, archaeological, historical, and anecdotal evidence to prove that there has been a continuous presence of Jews in the land of Israel for close to 4,000 years.

Please read CUFI’s Primer: The Continuous Jewish Presence in the Land of Israel

Reflect on the CUFI primer and write a response to the following prompt: