How the U.S. Embassy Was Moved to Jerusalem

How the U.S. Embassy Was Moved to Jerusalem

President Trump’s decision to move the U.S. Embassy to Jerusalem represented the fulfillment of a promise made by the American people to Israel more than 20 years prior. Recognizing Jerusalem as Israel’s rightful capital was a long overdue correction in American foreign policy.

Since 1999, although the bipartisan Jerusalem Embassy Relocation Act had been passed into law, every American president from Clinton to Obama exercised their right to waive the relocation of the U.S. embassy to Jerusalem.

But finally, on the 70th anniversary of Israel’s declaration of independence and rebirth as a modern nation, on May 14, 2018, the United States officially opened its embassy in Jerusalem. Along with CUFI’s Co-Executive Directors Diana Hagee and Shari Dollinger, CUFI’s founder and Chairman John Hagee was in Israel to participate in this historic moment.

In recognition of CUFI’s significant role in encouraging the President to move the embassy, Pastor Hagee was asked to give the official benediction at the opening ceremony and affirm God’s blessing on Israel and America through this long-awaited recognition of Jerusalem as the eternal capital of Israel. 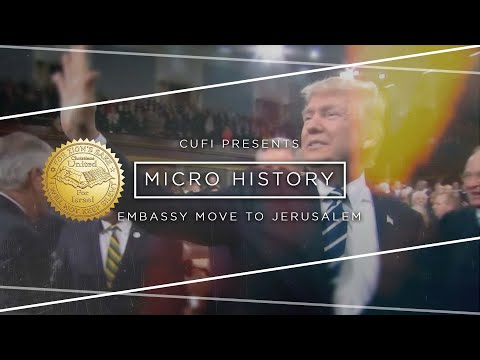 Share CUFI’s Micro History video, “Micro History: Israel’s Independence (1948)” with your friends so they can learn about Israel’s miraculous rebirth as a modern nation.

To learn more about Jerusalem, the treasured city of the Jewish people, read CUFI’s Primer, “Jerusalem: ‘The Deep Yearning that Beats within the Jewish Heart.‘”