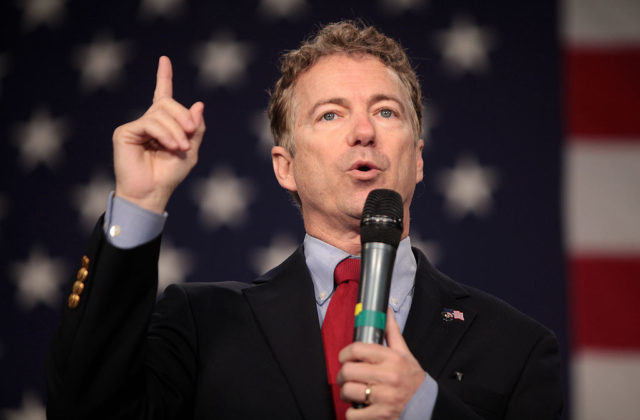 Rand Paul’s rationale for holding back aid to Israel

Senator Rand Paul (R-KY) is expected to introduce an amendment in the coming days that would limit the amount of U.S. security assistance to Israel, Jewish Insider has learned.

Paul recently came under fire from AIPAC and other pro-Israel groups for placing a hold on the U.S.-Israel Security Assistance Authorization Act of 2018, which would formalize the 10-year Memorandum of Understanding reached between the U.S. and Israel in 2016. Paul opposed Senate leadership attempts to reach unanimous consent on the bipartisan measure.

AIPAC and Christians United for Israel purchased online ads this week exposing Paul as the primary force holding up the legislation. CUFI also sent an “action alert” email on Monday urging its 4.5 million members to contact Paul’s office in support of the Act.

Paul responded to his critics in an exclusive statement to Jewish Insider issued in advance of his proposed amendment. “I’m not for foreign aid in general, if we are going to send aid to Israel it should be limited in time and scope so we aren’t doing it forever, and it should be paid for by cutting the aid to people who hate Israel and America,” he wrote. “This is a stance I’ve taken for many years.”

In a lengthy statement (included below in full), Paul cited comments made by Prime Minister Benjamin Netanyahu to a joint session of Congress in 1996 expressing his desire to see Israel achieve economic independence, presumably allowing for the gradual reduction of U.S. aid to the Jewish state. “In the next four years, we will begin the long-term process of gradually reducing the level of your generous economic assistance to Israel,” Netanyahu said at the time. “I am convinced that our economic policies will lay the foundation for total self-reliance and great economic strength.”

However, in a statement on September 14, 2016, Netanyahu — lauding the newly-signed MOU as “the largest military assistance package that the United States has ever given to any country” — noted that “many in the United States understand that investment in the security of Israel strengthens the stability of the unstable Middle East and serves not only our security interests but those of the United States as well.”

The Republican Senator from Kentucky also criticized AIPAC for opposing his efforts to slash U.S. funds to Pakistan and the Palestinian Authority, a move which he said would free up aid money for Israel. “Each time I’ve tried to stop giving aid to enemies of the US and Israel, I have been thwarted, often by groups that claim they are pro-Israel,” Paul complained.