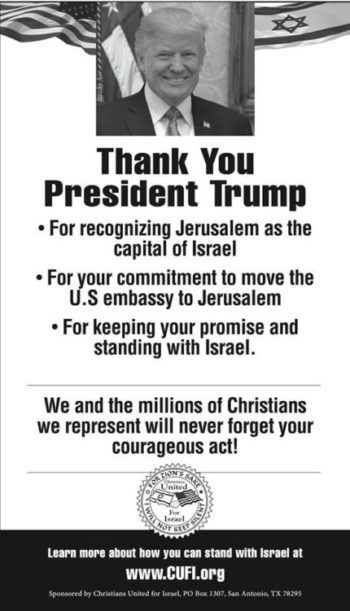 SAN ANTONIO – On Sunday, Christians United for Israel (CUFI), the nation’s largest pro-Israel organization, published a full page ad in The Washington Post thanking President Donald Trump for recognizing Jerusalem as Israel’s capital and beginning the process for moving the US Embassy in Israel from Tel Aviv to Jerusalem. The ad is also running today in Roll Call.

In addition to the ads, since shortly after the President’s announcement, more than 33,000 CUFI members have emailed the White House thanking the President for, “keeping his campaign promise and taking actual steps to move the U.S. embassy to Jerusalem.”

“The President made us a promise and he kept it. CUFI’s 3.8 million members recognize that the President resisted pressure from both inside and outside his administration to advance this policy because he knows that recognizing Jerusalem is simply the right thing to do. We will never forget this bold act. President Trump’s recognition of Jerusalem will be celebrated by Jews and Christians for all time,” said CUFI founder and Chairman Pastor John Hagee.

Since its inception, CUFI has been unequivocal in its position that Jerusalem is the eternal and undivided capital of the Jewish state. Each-and-every time Pastor Hagee has met with President Trump or Vice President Pence, he has reiterated the centrality of Jerusalem’s status to CUFI’s policy agenda. In January of 2017, just days before President Trump took office, the CUFI Action Fund held a Washington fly-in during which more than 260 leaders representing 49 states urged that the embassy be moved. And prior to the President’s announcement Wednesday, CUFI members sent more than 137,000 emails to the White House in support of moving the embassy to Jerusalem.

“Millions of Americans in every state and congressional district across the country are celebrating President Trump’s decision to recognize Jerusalem and move the US Embassy there. We hope the President’s decisive support for Israel will help other elected officials in both parties see that the American people want their leaders to stand up and speak up for the Jewish state,” noted CUFI Action Fund Chairwoman Sandra Parker.

“President Trump kept a key campaign promise that motivated many of our members to vote for him.  In response, he’s come under serious criticism from pundits and politicians, including many who have made the same promise. As an organization that believes the President did the right thing, we felt a moral obligation to counter this chorus of criticism with some very prominent praise,” added CUFI’s founding executive director David Brog.