Pitching In For Israel With Hispanics 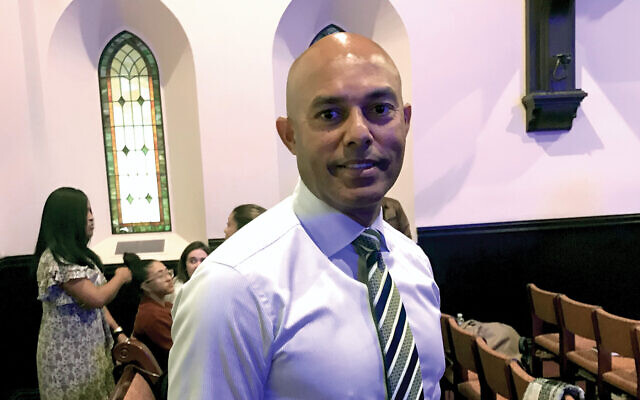 Mariano Rivera, the Yankees Hall of Fame relief pitcher, is looking for one more save: an Israel under assault from too many directions to count.

With 7.1 million members, CUFI, the largest pro-Israel group in the world, is hardly hurting, but some CUFI observers couldn’t help but notice recent surveys disclosing a shrinking percentage of white Christians in the United States, even as Hispanic Christians, in Central America and here in the States, are spiritually migrating from traditional Catholicism into the Evangelical tent.

Since Evangelicals, as a group, are the strongest supporters of traditional Zionism, some Jewish groups, particularly the American Jewish Committee, have also noticed the possibilities for commonality with Hispanic Evangelicals. In October, AJC became the first Jewish organization invited to address the general assembly of the Alianza Evangélica Latina (Latin Evangelical Alliance). The Alianza represents more than 100 million Latino Evangelicals in 22 countries, particularly in Latin America, let alone the millions of Latino migrants entering the United States in recent years. At Orlando’s Calvario City Church, Rabbi Noam Marans, the AJC’s director of interreligious relations, told the Alianza, “Jews and Latino Evangelicals must be brothers and sisters who will together battle the hate that demonizes both our communities.”

It is not a coincidence, noted Christianity Today, that as Evangelicals are multiplying in once-Catholic dominated Central America, that region is becoming more supportive of Israel. Guatemala and Honduras, two countries that saw a steep decline in Catholicism and a surge in “evangelicos,” are also two of the countries that sided with the United States when the United Nations condemned the American recognition of Jerusalem as Israel’s capital. Guatemala moved its embassy to Jerusalem, as well.

Guatemala’s President James Morales, an evangelical, made Israel his first official trip outside the Americas. Nicaragua has also re-established diplomatic relations with Israel.

According to a Pew Research Study, nearly one-third of American Hispanics (32 percent) are no longer in the religion in which they were raised (mostly Catholic) but remain religious (as Protestants): 39 percent attend church weekly, with 19 percent of Hispanics now Evangelical.

Meanwhile, American millennials are less religious than ever, with 4-in-10 considered “nones,” people without any affiliation, at all.

CUFI has been looking at the same numbers. To counter the “nones,” and to solidify Israel’s position with young evangelicals – fewer of whom (58 percent) have an overall positive perception of Israel compared to older evangelicals (76 percent) — CUFI opened branches on more than 300 college campuses, training students to advocate for Israel. To match the tale of Palestinian refugees, CUFI started the Mizrachi Project to tell “the story of the more than 850,000 Jewish refugees expelled from North Africa and the Middle East. It also started an anti-BDS (boycott, divestment, and sanctions) “task force,” is bringing evangelical pastors to Israel, and two years ago appointed Rev. Peter DeJesus, from Puerto Rico, as its national Hispanic outreach coordinator. He’s been giving scores of Spanish-language sermons explaining Christian Zionism in scores of Spanish churches across the country, even several in the deep Bronx, far from the Deep South and the Far West where Hagee first established CUFI in 2006 from his San Antonio headquarters. Then again, San Antonio, too, has had an infusion of Central American migrants.

Evangelicals have famously become more pro-Israel than Jews. According to Pew (2019), a strong majority (62 percent) of American Evangelicals say President Trump is striking “the right balance” between Israelis and Palestinians, something only 47 percent of Jews agree with. (In the 2016 election, Trump garnered 28 percent of the Hispanic vote to Hillary Clinton’s 66 percent.) Mark Tooley of the Institute on Religion and Democracy told Christianity Today that Hispanic evangelicals “tend to be pro-Israel.”

Rev. DeJesus, speaking in Rivera’s church, Refugios de Esperanza (Refuge of Hope), whose altar is flanked by an Israeli flag and an American flag, told the multiracial congregation, “As Christians we love the God of Israel. And as Christians we should love the Israel of our God. It’s not a contradiction to our Christian faith, it’s a complement to our faith, it’s a fulfillment.” Evangelicals “must pray for the peace of Jerusalem and the Jewish people, and raise our voices and speak to our government so our government will continue to be the best ally to Israel. We are modern-day Mordecais and Esthers,” ready to intercede with the government to save Israel from its enemies.

Rev. DeJesus explained that, historically, Christian anti-Semitism stemmed from “Replacement Theology,” the idea that Christianity replaced Israel as the recipients of God’s blessings and heirs to His covenant. According to CUFI literature, this is a “caustic and deceitful teaching, [an] evil seed,” and DeJesus drew a straight line from that theology to the Inquisition to Hitler. By contrast, DeJesus said Evangelical Zionists believe God’s Covenant with Israel remains intact and inviolable and, as God promised Abraham, “I will bless those who bless you, and I will curse those who curse you.” This was not just in Biblical times, but “into eternity.” The Jews, according to CUFI, “are still chosen, still loved, still precious in God’s sight, and” because they are important to God, “Christians should refuse to remain silent when other countries and individuals attempt to demonize and delegitimize Israel and her people.”

Since the 1970s, the handsome stone church, built in 1907, had been in a state of decay, waiting for a wrecking ball, if anyone could be bothered to swing it. This wasn’t the slick part of New Rochelle but North Avenue, the commercial strip. On one side of the church is a laundromat. On the other side is a police station that used the old church as a warehouse to hold evidence. Across the street is Kenny’s barber shop and a ribs take-out. Then, a few years ago, the City of New Rochelle sold the run-down church to Rivera for $1 and his promise to bring it back to life.

Rivera invested between $3 million and $4 million, said a church member, and the church reopened five years ago as Refugio de Esperanza – Refuge of Hope, an evangelical Pentecostal church, with subdued lighting, dark carved wooden beams and stained glass. The pitcher’s wife, Rev. Clara Rivera, became senior pastor, and Mariano is a pastor there, too. DeJesus’ sermon for Israel was in Spanish, with an English translator sharing the podium, and biblical passages were displayed on a screen in one language, then the other.

Rivera, like many Evangelicals, feels a spiritual tether to Israel and Jews. He’s taken several trips to Israel and recently told the Washington Examiner, “The Bible speaks about Israel. Everything — from New Testament, Old Testament — it’s all about Israel and the relationship His people have. So as a Christian, I understand that the chosen people of God is Israel — Jewish Israel. The country was made by Him. All the other countries were made by men. This country was built by Him for His people. Every time that I go to Israel, it blows my mind. I wanted to see more, I wanted to understand more. I wanted to learn more. The Bible comes to life when you’re there.”

Rivera, who spoke at CUFI’s annual conference in Washington earlier this year, was asked by the Examiner about getting criticism for his faith-based Zionism. He replied, “If I do, I’m OK with that. I know what I stand for: That won’t change. So, to me, criticism is more motivation to keep going forward — to push forward — for what I believe, for what I stand for. And again, that will make me even stronger.” The Jews “are the people of God,” Rivera said. “They are the Chosen People, so I’m not going to be against God.”