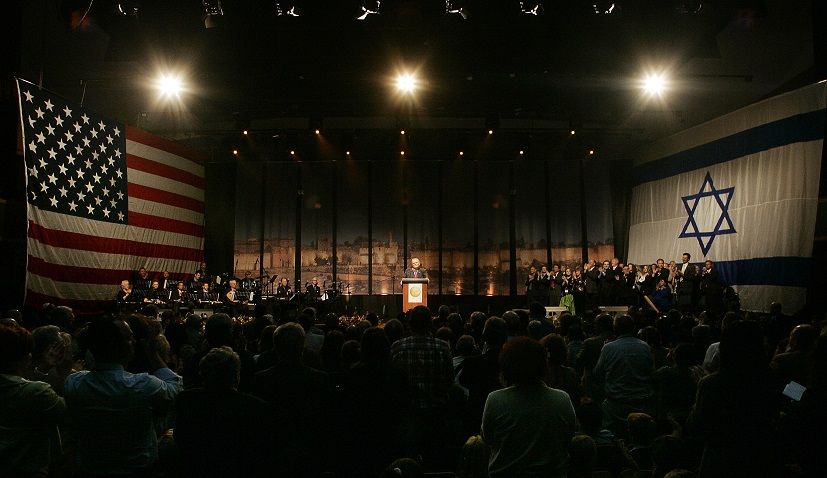 Israeli Prime Minister Benjamin Netanyahu and no less than five top US officials addressed the annual Christians United for Israel (CUFI) confab in Washington D.C. as the largest grassroots pro-Israel conference in America kicked off Monday.

A common theme running through the evening’s heavyweight speeches: soaring tensions with Iran and the Islamic Republic’s nuclear capabilities.

Netanyahu kicked off the evening, appearing via satellite link the 14th Annual CUFI Summit, an event which draws thousands of pro-Israel Evangelical Christians from across the United States each year.

The Israeli leader dedicated a portion of his remarks to tensions with Iran, slamming the “terrible” 2015 nuclear deal with world powers which he claimed had paved the way for Tehran to develop a nuclear bomb.

Though CUFI describes itself as a bipartisan organization, no Democratic speakers are listed as participants.

CUFI, which counts 4.3 million members from all 50 American states, touts itself as the largest pro-Israel grassroots organization which “strive[s] to act as a defensive shield against anti-Israel lies, boycotts, false theology, and political threats that seek to de-legitimize Israel’s existence and weaken the close relationship between Israel and the United States.”

The organization actively lobbies Congress on pro-Israel policies, and counts among its victories the passing of the Taylor Force Act, which penalizes the Palestinian Authority for paying pensions to terrorists.

While seeking to distinguish itself from dispensationalism, which holds that the modern state of Israel has a central role in bringing about the second coming of Jesus Christ, CUFI is founded on biblical teachings that God will bless those who bless the Jews and curse those who curse the Jews, noting that Christian faith could not exist with Judaism.