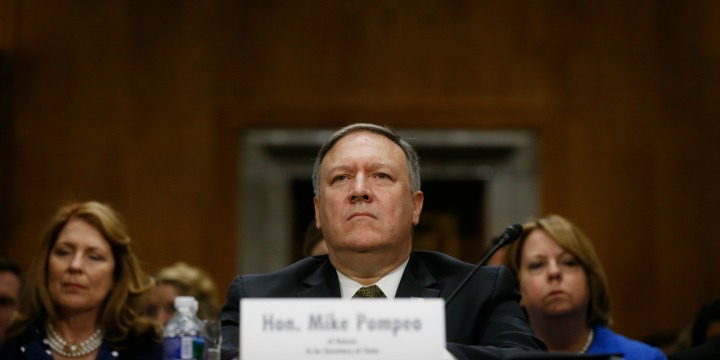 Jewish, Pro-Israel Groups Welcome Confirmation of Pompeo as New US Secretary of State

A number of Jewish and pro-Israel groups expressed well-wishes to Mike Pompeo on Thursday after his appointment to serve as the next US secretary of state was confirmed by the Senate with a 57-42 vote.

American Jewish Committee (AJC) CEO David Harris wrote in a letter to Pompeo, “As longtime admirers and supporters of the State Department’s defense of American interests and values across the globe, and as proud civil society partners in that vital mission, AJC congratulates you on your swearing-in as Secretary of State.”

In a statement, Christians United for Israel (CUFI) noted that its action alerts had generated more than 60,000 emails to Senate offices in support of the Pompeo nomination.

“Our membership is the backbone of our organization and they rose to the occasion to ensure the President’s nominee was confirmed,” Pastor John Hagee, CUFI’s founder and chairman, said. “When a large, committed group of Americans stands together and speaks with one unequivocal voice, our leaders listen.”

Anti-Defamation League (ADL) CEO Jonathan Greenblatt, who had previously expressed concerns about Pompeo’s nomination, stated, “Now that he is Secretary of State, Mike Pompeo will have an opportunity to play a leading role in shaping American foreign policy — to help build respect for the United States around the world and help to ensure its security. We wish him every success in that essential work and hope he will endeavor to represent the interests of every American.”

Both the AJC and ADL called on Pompeo to appoint a Special Envoy to Monitor and Combat Anti-Semitism in the near future.