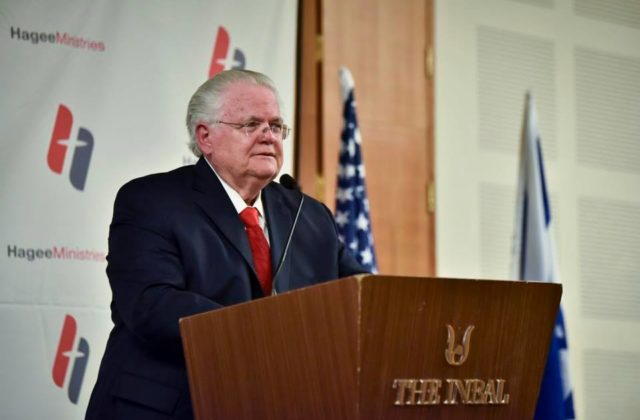 JI INTERVIEW — Pastor John Hagee, founder of Christian United for Israel, discussed his group’s efforts to pressure Senator Rand Paul (R-KY) to remove a holdon the U.S.-Israel Security Assistance Authorization Act of 2018 in an interview with Jewish Insider’s Jacob Kornbluh. Hagee was in Washington, DC over the weekend to attend the White House Hanukkah party and meetings on Capitol Hill regarding several pro-Israel bills.

Pointing out that this is the final approval of the bill after it was first passed by the Senate in August, Hagree said, “Paul put a hold on the legislation the second time around. He, in essence, supported its passage before he opposed its passage, and for reasons that no one really fully understands.”

“I can’t help but believe that Rand Paul is fully aware of the political consequences of standing against this support of Israel when Israel so desperately needs the help,” Hagee added. “We have 110,000 members in the state of Kentucky that are contacting him continuously and I’m sure that he has been made fully aware of that at this point in time.”

Asked how CUFI — which passed the 5 million-member mark this week — would work with a divided Congress in the next two years, Hagee noted, “CUFI is a non-partisan organization. We work with elected officials from both parties as long as the issue is Israel. We are a one-issue organization. Israel, Israel, and Israel. And if it helps Israel, we support it. If it’s opposed to Israel, we oppose it.”