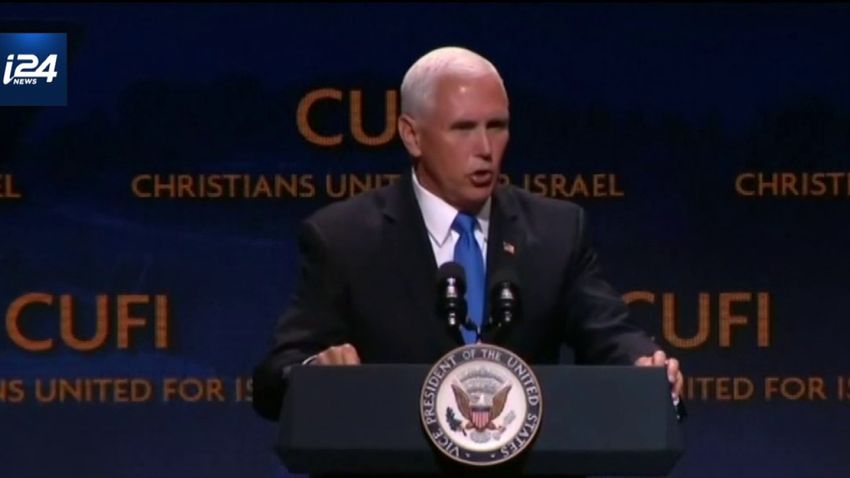 “We must never allow the memory of those lost in the Holocaust to be cheapened as a cliché to advance some left-wing political narrative,” said U.S. Vice President Mike Pence.

“Let me be clear: Iran should not confuse American restraint with a lack of American resolve,” Pence said in front of attendees at the annual summit by Christians United for Israel, a pro-Israel organization with millions of members, a few weeks after U.S. President Donald Trump decided not to retaliate militarily against Iran for shooting down a U.S. drone aircraft that same week.

“We hope for the best, but the United States of America and our military are prepared to protect our interests, and protect our personnel and our citizens in the region,” he said.

Additionally, without calling her out by name, Pence blasted Ocasio-Cortez for saying that the United States is “running concentration camps on our southern border,” in reference to migrant detention centers.

“We must never allow the memory of those lost in the Holocaust to be cheapened as a cliché to advance some left-wing political narrative,” said Pence.

“Sadly, in recent weeks, that’s exactly what some Democrats have done in the national debate,” he continued. “Last month, a leading Democrat in Congress actually compared our U.S. Customs and Border Protection detection facilities to concentration camps.”

Pence lamented Democrats who defended the remarks by the freshman congresswoman, including Rep. Jerrold Nadler of New York.

“To compare the humane work of dedicated men and women of Customs and Border Protection with the horrors of the Holocaust is an outrage,” said Pence. “The Nazis took lives; American law enforcement save lives every day.”

He added that “this slander of law enforcement was an insult to the 6 million killed in the Holocaust.”

In his speech, Pence also celebrated the Trump administration’s pro-Israel moves, including defunding U.S. assistance to the United Nations Relief and Works Agency for Palestine Refugees in the Near East (UNRWA) in September 2018; the shuttering of the Palestine Liberation Organization mission in Washington, D.C., in October 2018; the United States leaving the U.N. Human Rights Council in June 2018; recognizing Jerusalem as the capital of the Jewish state in December 2017 and moving the U.S. embassy there from Tel Aviv in May 2018; withdrawingthe United States from the 2015 Iran nuclear deal in May 2018; and recognizing Israeli sovereignty over the Golan Heights in March.