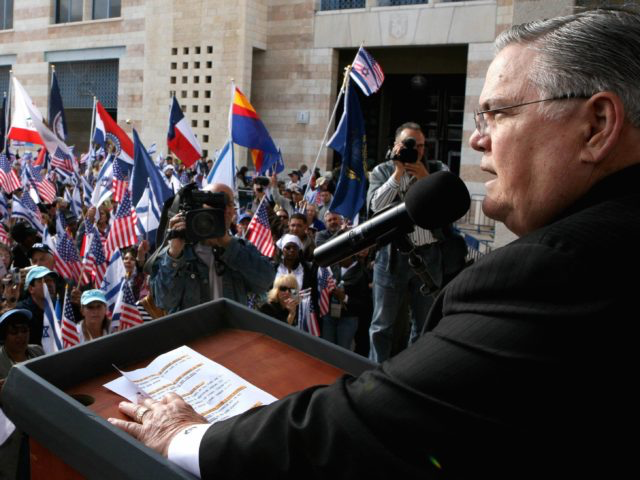 Pastor John Hagee: Why Evangelicals Stand with Israel — The Principles of Christian Zionism

Evangelicals believe the Bible to be the Holy Spirit-inspired, inerrant, Word of God. The Word and will of God are synonymous, and thus Israel is the only nation created by a sovereign act of God.

In Genesis 13, God told Abraham, “Lift your eyes now and look from the place where you are … for all the land which you see I will give to you and your descendants forever.” This covenant is repeated twenty-two times in the Scripture.

St. Paul writes in Romans 15:27: “For if the Gentiles have been partakers of their spiritual things [the Jewish people] their duty [the Gentiles] is also to minister to them in material things.”

Jesus Christ, a prominent rabbi from Nazareth, said …”For salvation is of the Jews” (John 4:22). The Jewish people have given to Christianity the Word of God; Abraham, Isaac and Jacob; the Old Testament Prophets; the first family of Christianity — Mary, Joseph and Jesus; the twelve Apostles, and St. Paul. Therefore, it is impossible to say, “I am a Christian” and not love the Jewish people.

Jesus never denied his Jewishness. He was born to Jewish parents (Luke 1:26). He was circumcised on the eighth day in keeping with Jewish tradition (Luke 2:21). He had his bar mitzvah on His thirtieth birthday (Luke 2:41-50). He kept the Law of Moses (Matthew 5:17). He wore the  prayer shawl Moses commanded all Jewish men to wear (Mark 6:56 CJB). He was murdered by Rome on the cross with an inscription over His head, “Jesus of Nazareth, The King of the Jews” (John 19:19).

Jesus is called “The Lion of the Tribe of Judah” in the Book of Revelation (Rev. 5:5). The words Judah and Jew are derived from the same root word — meaning that when Jesus, the Root of David, returns to earth He will identify with the Jewish people.

Evangelicals support Israel because God promised Abraham in Genesis 12:3, “I will bless those who bless you and will curse those who curse you.”

Consider the Pharaoh who liberated Joseph from an Egyptian prison, making him the viceroy of Egypt following his power to interpret the dreams of Pharaoh. That Pharaoh prospered beyond measure.

However, the Pharaoh “who knew not Joseph” (Exodus 1:8) persecuted the Jewish people even to the point of drowning Jewish children in the Nile. This was the Pharaoh that God later drowned with his army at the Red Sea.

The principle of “I will bless those who bless you” is continued in Luke 7, where a Roman centurion had a sick servant who was about to die. The centurion sent Jewish elders to plead with Jesus to pray for the dying servant.