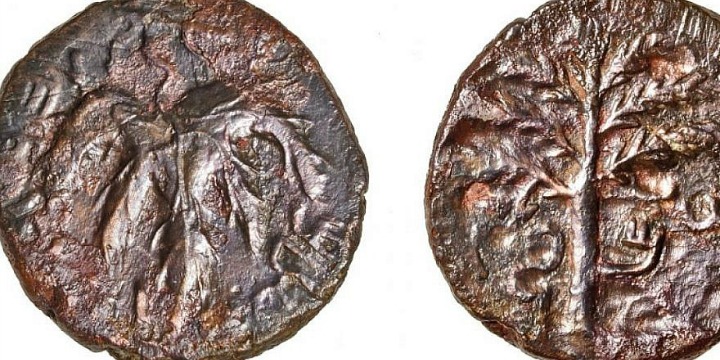 As Jews across Israel and around the world celebrated Lag B’Omer, a holiday commemorating the life of anti-Roman Torah sage Rabbi Shimon bar Yochai, Israeli authorities announced that they had found a symbol of the revolt by Shimon bar Kochba against the Romans in the form of a small bronze coin.

The single round coin was discovered as part of an archaeological excavation in a limestone cave outside the city of Modi’in. Etched on one side is a seven-branched date tree bearing two clusters of dates and inscribed with the letters shin mem ayin for Shimon, the leader of the rebellion against the Roman occupation of Israel. The other side contains an etching of a grape leaf and the abbreviated inscription L’Herut Yerushalayim or “For the Liberty of Jerusalem.”

The find took place as part of a joint excavation carried out by the Defense Ministry’s Coordinator of Government Activities in the Territories (COGAT), Bar-Ilan University and Ariel University.

Archaeologists noted that the distance of the find, which included potsherds and glass shards, from Jerusalem indicates that the revolt had spread far from the city that stood at the center of the rebellion.

The Bar Kochba rebellion, or “Great Revolt,” lasted three-and-a-half years. During that time, more than 1,000 Jewish towns and 50 fortresses were destroyed, and hundreds of thousands of Jews were killed.

Rabbi Akiva—the mentor of Rabbi Shimon bar Yochai—was one of many rabbinical leaders who supported Bar Kochba, and believed that he would be a messiah for the Jewish people.

After news of his criticism of the Roman occupation reached Roman leadership, Rabbi Shimon Bar Yochai was forced to flee with his son, Rabbi Eleazar, living in a cave for 13 years. He died on the 33rd day of the Omer—known as Lag B’Omer—a day that was subsequently celebrated due to his elucidation of the secrets of Jewish mysticism, named the Zohar.